Here’s my baby, right after she smacked her head on the floor, despite my best efforts to save her from such bumps…

The purpose of my life has become keeping this child of mine from eating the boxelder bugs that keep coming into the house.

Still not clean though, thanks to the new game the child plays called something like “when I’m sick of eating I will mash it all up with my tiny hands and then fling it on the floor.” 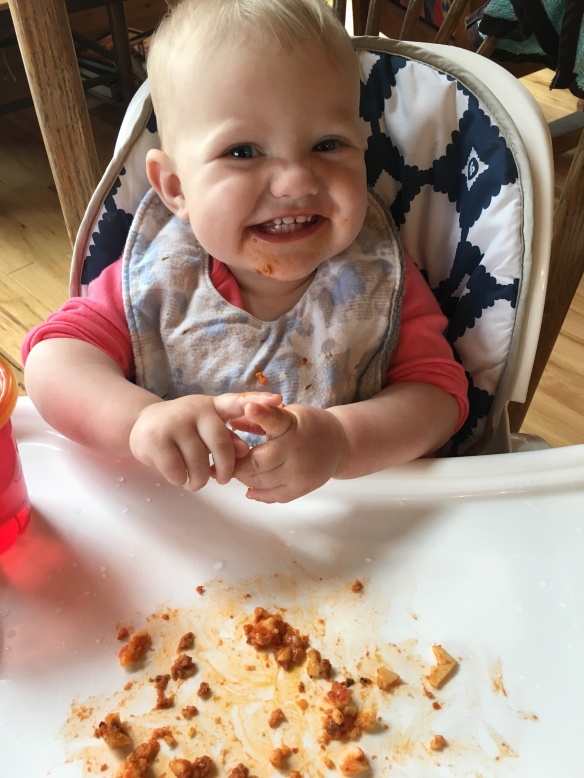 The purpose of my life has become cleaning squashed avocados out of the crevices of her high chair. And off her little pants. And then, if I see it while I’m sweeping up dead boxelder bugs, I might also get to scraping that squished avocado off the floor.

Not that it’s a matter of life or death, those avocados or those squished boxelder bugs, (they probably have some sort of nutritional value, those bugs) but they’re just added tasks on top of the main purpose of my life, which is keeping this child alive.

Seriously. Nobody tells you when you take your sweet bundle of joy home with you, the little miracle that can’t roll over on her own, or hold her head up or her eyes open very long, that in a few months they will try every day, as hard as they can, to get themselves seriously hurt, and in turn, try to kill you. You know, because of all the heart attacks.

Here she is, trying to strangle herself with my bra

I had one the other day. A heart attack. Or something like it. It was sort of cold outside, but we needed some air. So I bundled the child up in her hat and snowsuit, strapped her in her stroller and put a blanket over her. She was pleased. She loves walks. There’s nowhere else in the world she’d rather be than outside, but damn, the wind was cold up top on the road. Too cold for her mother, so too cold for the baby.

So I wheeled her back down to the house and thought, well, while we’re all bundled up she can sit in her stroller and I can pick the rest of my tomatoes. Because I’m still holding out hope that a twenty-fifth hour will show up in a day, or better yet, an eight day in the week, and I’ll find some time to make salsa this year.

So I grabbed my garden basket and headed out back, situated Edie where she was out of the wind and could watch her momma work and looked up every few minutes to yell at Gus for licking my baby’s face.

Not that the baby minded at all. In fact, she was thrilled with it. She grabbed his ears, squealed and leaned in for more, again proving that babies get a real kick out of risky, germy, behavior.

Anyway, my garden is on a little slant of a hill, something I’ve never thought twice about until I looked up again to watch my baby, and the stroller she was in, on the tail end of a sideways tip to the grass.

And I’m not positive how it happened, I mean, I didn’t witness it, but I blame it on the dog.

I threw down the tomatoes and ran to her, certain that one of her limbs was missing, or, at the very least, broken. Positive she had a concussion or at least scarred enough for life that she’ll have flashbacks whenever she sees a dog.

Oh Lord, I’ve given her an aversion to tomatoes.

I looked at her pink cherub face as it morphed into the beginning stages of her cry– wrinkled up nose, eyes squeezed tight, mouth wide open, silent gasp to get a good breath of air and then a wail.

I unbuckled her from the sideways stroller and picked her up before her next breath, looked her over for blood or mud or a missing foot or something and waited for the next wail to release from her lungs.

But it didn’t happen.

She was up in my arms, caught sight of the dog and smiled.

But I wasn’t sure I was.

Seriously. I need a back up heart.

Jessie and the Daredevil

7 thoughts on “A motherhood tip.”