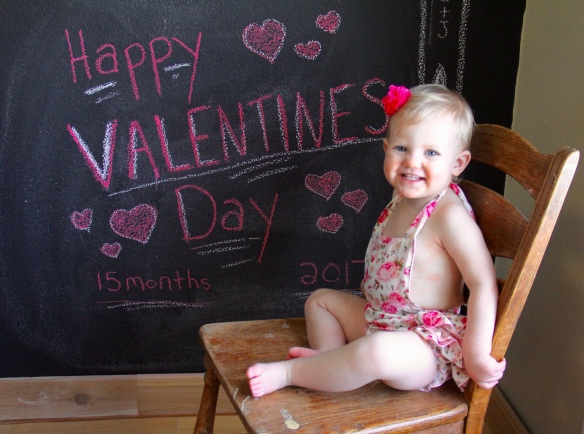 Because Valentines Day is approaching and because more than anything in this life of ours the little things add up to the biggest acts of love.

Last week I had a couple meetings I scheduled in the late afternoon. I do this on days I don’t have Edie in daycare, strategically overlapping the beginning of my workday with the end of my husband’s.

Because we live 30 miles and a good 45 minutes from town, the planning can be a little tricky and usually involves a quick stop and drop at Gramma’s store so Edie can destroy the place before her daddy picks her up.

Anyway, after one of my meetings ran a little late in town, I decided to stop at the grocery store. Without a toddler in the cart practicing her fast-pitch skills with a bag of oranges, I could linger a little longer and think a little bit about the week’s meal plan, or, because I haven’t made a week’s meal plan ever in my life, at least I could take a second to price compare. Which I did. And I also picked up fried chicken from the deli, so supper was covered for another day.

By the time I finally made it through the door of the house, Edie was already sleeping in her room, the lights were low in the house and remnants of the evening were scattered from living room to kitchen, giving me a detailed map of what father and daughter had been up to together.

I chatted with my husband while I made my way to the bedroom to change out of my town clothes, throwing him the usual questions like, “How was she tonight? Was her nose still stuffy? “Did she go down OK? “What did she eat?”

Then I spotted a little pink bottle of fingernail polish on the coffee table sitting next to her sippy cup and cardboard book. Because I haven’t painted my fingernails since the seventh month our child was in utero, my next question was, of course, “What’s with the nail polish?”

He was so nonchalant about it.

“Really? You painted her nails?” I asked, my voice suddenly moving up an octave as I pictured the scene, my heart beginning the melting process inside my chest.

And that’s really the end of the story because nothing extraordinary happened next in that house that evening. The two of us ate fried chicken at the counter, talked about our day, probably turned on the TV and argued about something in the news before trudging upstairs to bed.

These are the ins and outs of our regular days, nothing so glamorous or extraordinary about our lives or our family or our love story.

But for some reason I keep going back to that little scene, one that instantly brightened up a busy but regular week, the one that starred my stoic and scruffy husband holding that tiny polish brush in his big callused hands while balancing his baby daughter on his knee, gently coaxing her to hold still while he placed teeny dots of pink polish on her miniature fingers.

Ugh, there’s so much to say about that little moment besides the fact that it had the power to lift my spirits in such a unique way.

And it’s not that I think this is uncommon behavior for dads and daughters necessarily; it’s just that I know my husband and I know that I begged him to paint my toenails when I was pregnant with his daughter and the man refused, noting that he didn’t have a steady enough hand.

But the child can’t talk yet. She doesn’t know what fingernail polish is, so nail painting was his idea of something fun the two of them could do together.

But you know what I realized then? In all of the countless hours I’ve spent with that baby girl in the house alone, I’ve never once painted her fingernails. I don’t have the patience for it. I would much sooner choose banging two pot lids together or letting her rip up the roll of toilet paper in the bathroom. 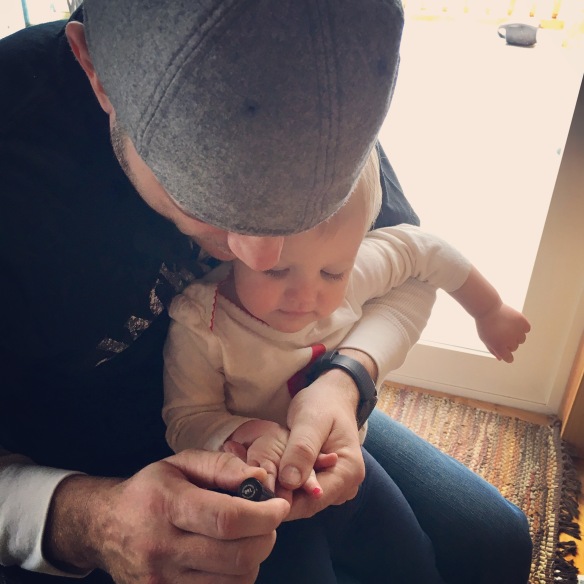 5 thoughts on “Love in an ordinary life”