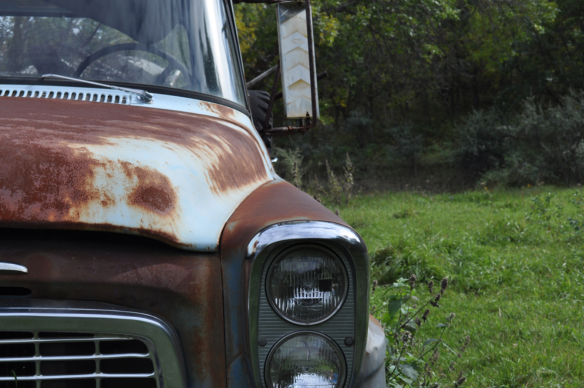 Why I blame my dad for my stick shift struggles
by Jessie Veeder
Forum Communications
http://www.inforum.com

I have a confession to make.

Oh, I can make it work. I can get from Point A to Point B if Point A is the house and Point B is the barnyard over the hill, the hay yard, or my parent’s house a mile down the gravel road, but that’s where my gear-finding, clutch-pushing confidence ends.

I know, I know. It’s embarrassing. Some things are just expected of you living out here among cows and barbed-wire fences. But I have a handicap.

And I could say I have no one to blame but myself, because I’m ultimately responsible for taking the initiative to master something I need to know, but forget it.

I blame my dad.

I blame my dad and all the old, impossible, gear sticky, seat-stuck-too-far-back, ancient and impossible pickups he enlisted to teach me to drive back in the day.

I mean, how’s a girl to grab a chance at finding the right gear when the gear indicator knob long ago popped off and rolled around on the floorboards before meeting its ultimate fate in some brush patch Dad was fencing one day in 1995?

Am I in reverse? The only way to find out is to release the clutch and hope I don’t kill it before rolling backwards while simultaneously hoping I’m not in first because there’s not much room for error in the 10 inches between the front of the pickup and the shop.

And that wasn’t the worst of it. There was one pickup he tried to teach me on that you literally had to push down a hill like a Flinstones car to get started. And once it turned over, well, you had to keep it gassed for fear of starting the whole ritual over again.

God forbid it quit at the bottom of a coulee somewhere.

Some of the biggest fights I had with my dad happened behind the wheel of his old pickups where he more than one chose the “just leave her to sort it out” method, and frankly, my pubescent tears of frustration just didn’t allow for that sort of sorting it out.

That’s the flashback I had yesterday when I suggested my husband run me through the workings of the hydraulic bale spear so I can feed cows on my own. I had left chicken baking in the oven, and we brought along the wiggly toddler who wants nothing more than for me to just scooch on out of there and let her take over.

Needless to say, I had a few distractions to blame for me killing it 37 times between my attempts at picking up and rolling the bales out.

But we were in Dad’s pickup, the one with the sticky gears, missing gear knob and seat that doesn’t move forward, so I blame him.

I will always blame him.

The beasts, in their final resting place. RIP…RIP…