To be a Cowboy
Forum Communications

In a few short weeks, I will pack up my guitar and head for the desert in Nevada for the National Cowboy Poetry Gathering.

It will be my second invite to this event that features cowboy singers, entertainers, makers and poets from across the country, each looking like the plains and valleys, mountains and foothills they were born to and all trying to answer and ponder the question — what does it mean to be a cowboy?

I close my eyes and I see him, my Great-Grandpa Veeder. I see him as a kid who came to settle this area with an ill father and a mother who had seven other children to care for. And so he took to it, helping to break up land, grow vegetables and raise horses for farming and threshing

I like to think that he was a man who, like the Badlands full of rocks and rattlesnakes, was not so easily tamed. And so he became the 50 mph winds, the biting, relentless horse flies, the dropping temperatures, the green grass and the rain that eventually fell with a promise that this all might work out if he was brave enough to endure it.

He couldn’t have known then that the work he was doing might someday be revered as sort of glamorous. He just took to it, like I said, and at barely 21, he bought his own place down the road and the rest is a history I walk by on my way to catch my well-broke horses or give my daughters a ride on their pony.

History like his old threshing machine that sits as a relic among the tall grasses and thorny tangle of prairie roses.

History like that humble red barn he moved in and rebuilt with his two sons, one of them my grandpa.

Time has passed us by enough now that we are wondering what to do with it. Should we tear it down or rebuild it? Has there ever been a truer metaphor for this generation of ranch families?

A relic that reminds us we have entered another realm entirely. A realm where steel siding and roofing and concrete would serve us much better, just like the new tractors with GPS and Bluetooth connections that we will likely never be able to afford, no matter how hard my great-grandfather, and my grandparents and my parents, worked to get us to this place where we can ponder.

As a kid, I spent my winter nights sitting on the pink carpet of my room inside the walls of my parents’ house tucked in the hills and oak trees of a ranch that has now been in my family for over 100 years. Behind my guitar, with a pen in my hand, I would attempt to work out the mysteries of the place in which I was raised, and will myself to understand how I was meant to belong here.

I wasn’t strong enough to open gates on my own. I wasn’t patient enough to break the horses my father broke. I wasn’t gritty enough or savvy enough or ballsy enough or grown-up enough to do the very thing that I wanted to do, which was to jump in and be brave.

But I love the sound a horse makes when she’s clipping the green grass from the ground. And the smell of the clover and the way a hay bale rolls out in the winter snow behind an old feed pickup and the black line of cattle following it.

I love the creak of a saddle, the scum on an old stock tank and the bite of the wind on the hilltop and the weather that changes up here like the light and the seasons and how it feels to really be out there in it.

Knowing it. Working it. Caring so desperately about it. 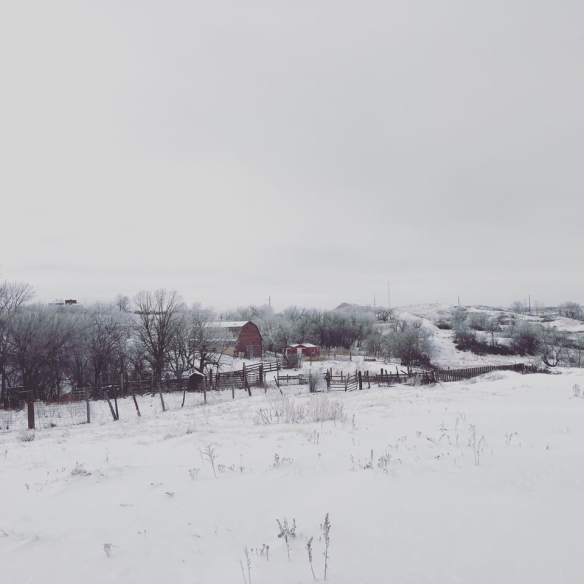 And so on that pink carpet, I wrote it all down. These cattle. These horses. This land and the big sky and this overwhelming sense that this might be our purpose, no matter how completely uncertain it is.

To be a cowboy.

See ya in Elko.

Click herefor a full line up of performances and where you can catch my dad and me performing.