Last week, our family and community lost a legend.

He was a man who wore a world of stories on his face. He looked like he stepped out of a Western movie, tall and lean, dark and perfectly weathered, waiting to get to the punch line under a black cowboy hat.

I want to write his book here, to tell you all about a man who was part of the honor guard that watched over the Tomb of the Unknown Soldier, that he was chosen to be Queen Elizabeth’s personal bodyguard during one of her visits to the U.S., that he was one of the 13 children my great-grandparents raised on the edge of these rugged Badlands.

Lynn Linseth (far left) serving in the honor guard at the Tomb of the Unknown Soldier.

I want to tell you that from such humble beginnings he went on to become a soldier and a boxer who wrecked cars and got in bar fights and loved his family and community and raised bucking horses and children and grandchildren and lived a thousand lifetimes in his 80-plus years.

I want to write his story, but I only know him as Great-Uncle Lynn who would come over to Gramma’s when I was a kid and sit at her kitchen table while she poured him a cup of coffee and maybe laid out a plate of cookies from the freezer.

I wish I had been old enough to listen to what they were talking about. In my mind, it would have unlocked the mystery of this man who seemed to me to hold the world up. But likely the two of them, brother and sister with a lifetime of memories and struggles together, were just talking about the weather and who came to visit last night, like the diary my grandma kept, the one I page through even years after she died, for a glimpse of what she might have been lingering over, worrying about or hoping for, as if knowing her secrets might somehow make up for the fact that I never got to ask her if she ever got lonely out here with all this sky and land.

Did it ever feel like she was being swallowed up in the beauty and burden of it all, the way I feel some days when the winter is long and the list of bills and chores is longer? And how do I make the buns she used to make, the ones my dad still remembers but will never taste again…

We all thought he just might live forever. But forever doesn’t exist here, not on this earth anyway.

And the passing of Lynn Linseth, more than anything, collectively seems to feel like the air going out of our lungs.

Because we wish we knew him better. Because we should have slowed down and asked him. Because time comes for us all. Because he broke the mold. Because the world needs more real cowboys, and who’s gonna show them now?

We’ll see you, young and fit and full of it, when we all meet again. 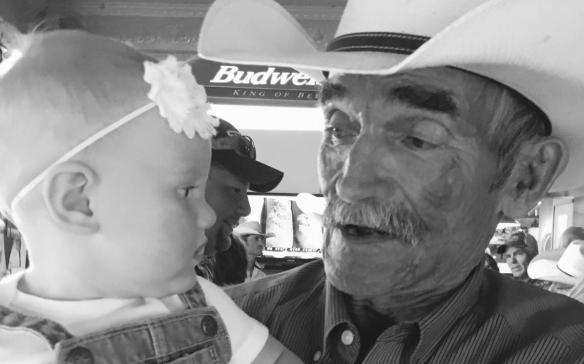 3 thoughts on “Honoring a Legend”