Ok, ok, it’s officially that time of year. I just looked at my calendar and promptly felt guilty for making fun of friends and family and all of the department stores around me who were eagerly rolling out the Christmas wreathes, wrapping, lights, tinsel, candy canes, enticing seasonal sales and the waving, inflatable Santas, snowmen and baby penguins my momma would love to shoot with her B.B. Gun (that is, if we were dumb enough to allow her to touch a weapon, which we are not. So your Santas are safe).

Yes, the calendar says there are only six more weekends until the birthday of sweet baby Jesus, but there are many other clues around here that indicate there is no denying winter and we might as well get used to dressing in layers so thick we can eat all the kneophla we want, hat hair, maneuvering through tasks with mitten hands, car starters and for the not so fortunate, trips outside to start the vehicle in our robe and slippers at 6 am.

As I stare out the window of our cozy abode, I am made well aware of one of those signs—the second snow storm. See the second snow usually comes after the first snow has melted and we are all feeling really great about ourselves and convincing each other that yes, 55 degree weather, although it has never happened before, could indeed stay around until well into December.

And we were really lucky last weekend, because that is what we had. Beautiful, glorious, sun shining November weather.

The perfect weather for the first sign of the shift in seasons, and that is my favorite. Roundup.

Yes, roundup–a time to gather all of the cows and calves to get ready for the sale.

And for those of you who are thinking right now about cowboys whooping and hollering with bull whips and chaps moving cows effortlessly down the slopes of steep mountains, through raging rivers in the bright sunshine of the dessert, looking all handsome and regal and then breaking for a lunch served off of the back of a chuckwagon, coffee in tin cups, grits and a slab of said beef on accompanying plate before riding off into the sunset, the cattle in a perfect line moving effortlessly over the horizon, I’m going to have to tell you to stop right here.

Yup, stop reading this garbage if you want to keep that Hollywood image, because although roundup may look like that at those million dollar operations (and in Texas, where everything looks like the movies) I have made a promise to tell it like it is folks.

Now don’t get me wrong, around here there is adventure, there are fast horses, and water and cows in lines moving over the horizon…just most of the time the horses are fast to get to the cows that are moving over the wrong horizon and crossing the wrong creek.

When I was growing up, roundup was a big deal for me. It meant getting up early, bundling up in my chaps and warm jacket and thick socks and eating some toast before heading out to meet the neighbor girls who came over with their dad and their horses and their pink beanies and mittens to help. And we would take directions from our fathers as we trailed behind the line of cattle that the men would gather from deep in the coulees, the tops of hills, thick brush and creek beds.

And the neighbor girls and my sister and I would feel important and successful and extremely helpful as we pushed these cattle, hollering our favorite cow moving sound effects like “yip yip,” “Hya,” “c’mon cows” while we moved them along through the gate and into the pen.

Back then it was easy. It was fun. There was very little drama.

Because we were nine and ten and oblivious.

But time moves on and things change and now the real cowboy, my pops, has this to work with.

Because while poor husband is working on the weekdays at a job that helps pay for my sweet neckerchiefs and giant glasses, ensuring that I look as much like Napolean Dynamite as possible, I am free to be around.

You know, that’s why I’m here.

So last Thursday, after assessing the situation, pops had a plan to wait for more help in the evening before we attempted to gather all 120 cow and calf pairs. But as the days grow increasingly shorter (another one of those signs of the season change) he realized that an hour and a half might not be enough time to get the job done.

So he came over to my place with a new plan and full confidence in his fully-grown daughter. We were going to get the cows in ourselves. All of them.

And why not? We had all day, and what a beautiful day it was.

So I put on my long underwear (it was a beautiful day, but still ND in November, so you know, gotta layer up), my beanie, my neckerchief, my long jacket (with my name embroidered on the chest, you know, just in case I got lost out there)  and my mittens, and headed out the door and into the Wild West.

Having forgotten over the summer how restricting it is to have all of your fingers crammed together under leather and fuzz with only a single thumb out to fend for itself, I quickly regretted the mittens. But pops and me and my mittens headed out to the hills and toward the cattle sunning themselves by road, grazing unaware, mooing and chewing and, apparently contemplating ways to make this really difficult for the real cowboy and the alien looking creature on the horse heading toward them.

And while pops ensured me this would be a piece of cake, I obliviously (did I mention I was on a high dosage of cold medication) snapped action shots as the cattle appeared to cooperate before giving each other secret-code bovine handshakes and promptly splitting off into four or five groups, each group heading for a different gate.

No group heading for the right gate.

So while most of our cattle moving is done slowly and surely, cow-whispering style, it was clear that method was not going to get the job done. Especially with one real cowboy and one woman on medication who was warm enough thanks the layers and mittens, but really, wasn’t quite what you would call quick, you know, thanks to the layers and mittens.

But despite the bundling and meds, we had to kick it in gear and run for the north hill to head off the first group, then to the south gate to head off the second and down to the creek bed to get the scragglers, and to the east clearing and back again.

The horses were sweating.

Now I was sweating.

Pops was calm, cool and collected.

Because, look, the cows are headed toward the dam, all of them, and he was sure they would gather there and take a little drink and then we would move them toward the home pasture and into the corrals.

And there I was, back in my familiar position, behind the trail as pops walked atop the nearest hill, along the adjacent brush patch, plugging up the open spots and reading the cattle’s minds, anticipating their next move… 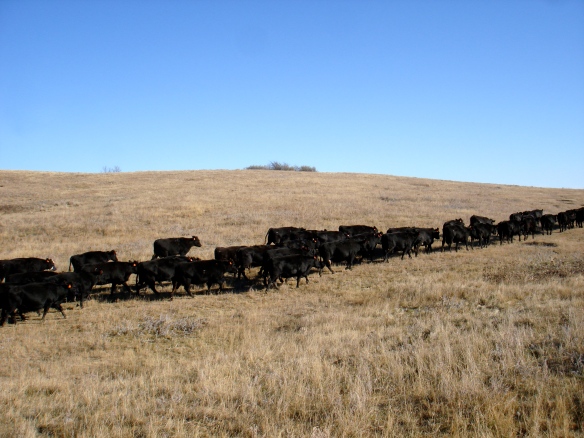 So I took off my mittens, snapped another picture and took a deep breath. Almost done. But as we made it to the dam, the cows’ next move became apparent.

And it wasn’t hanging out to take a drink.

It was breaking into a trot past the water and off into the bur oak trees and thorns and brush that grows wild and thick up the steepest hills around the watering hole, some of the gnarliest hills on the place.

Head groggy, perspiration dripping from my beanie, my congested mind hadn’t wrapped around this new turn of events as pops flew up the hill, calmly telling me to stay put, to watch the opening so the cattle wouldn’t turn back.

And as I sat there on a horse that doesn’t like to be left alone, we watched as the cattle moved out of the brush and to the top of the hill and turned to the west instead of back north. And when convinced by pops to move in the right direction, another batch poked through the trees and moved to the east while pops was busy correcting a couple strays.

And then I couldn’t see anything, but if you have never heard cattle moving through the brush after having been separated from their calves, I’ll tell you something, it’s the definition of ruckus: bellering, tree branches snapping, leaves crunching.

And then no pops.

I was transported back to my childhood when I would be left on a hill somewhere to wait and my dad would be out of site for what I was sure was hours and I would play through the worst case scenarios in my head: he got bucked off, he broke his leg or cracked his head open on a rock and I would have to find him and try to lift him back on his horse and get him to the hospital and, and, oh Lord, let him appear over the hill. Oh Lord, oh dear, oh man…oh

Back with part of the herd and a sweaty, panting horse.

So, to make a story that is getting quite long a bit shorter, I’ll break it down for ya:

We moved the the cattle he managed to acquire quite effortlessly to the barnyard.

Pops switched horses.
We went back to get the rest.
We got the rest.
I got off to get the gate just as the cows were approaching their destination.
The cows saw me and turned a different direction.
My horse stepped on his reins.
My reins broke.
Some cows got away.
Pops got them in. 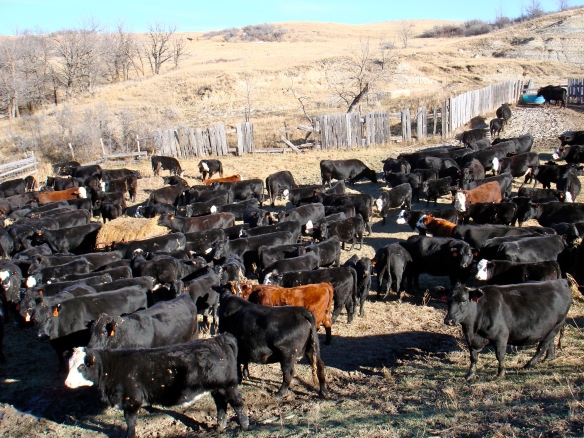 Pops got them in.
They were all in.
We high fived.

I unsaddled, went in the house, made a sandwich and took some more DayQuil. 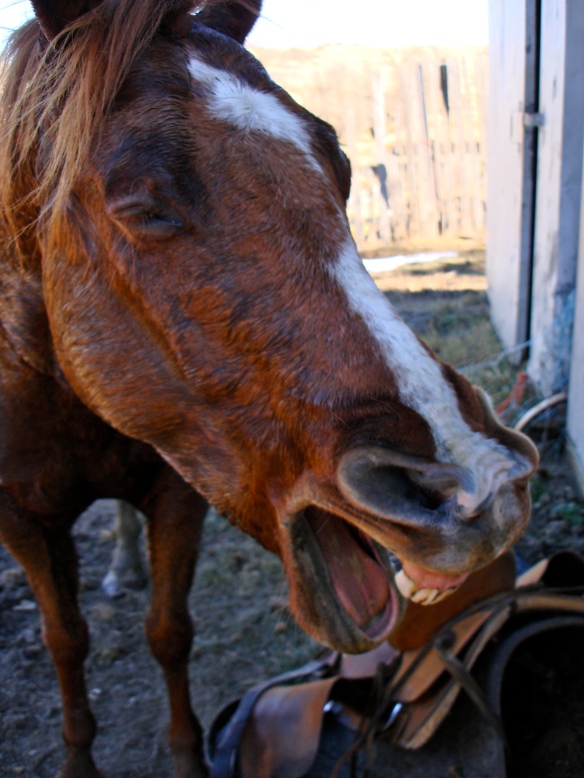 Oh, and I made pops a sandwich too. And we talked about the ride and looked out the window of my kitchen where we could watch the bovines settling in, taking a bite of hay, a lick of salt and pooping everywhere. And as they were rehashing the events of the day I am sure they were feeling a bit defeated as they thought this time, this time, they were sure to make the great escape. 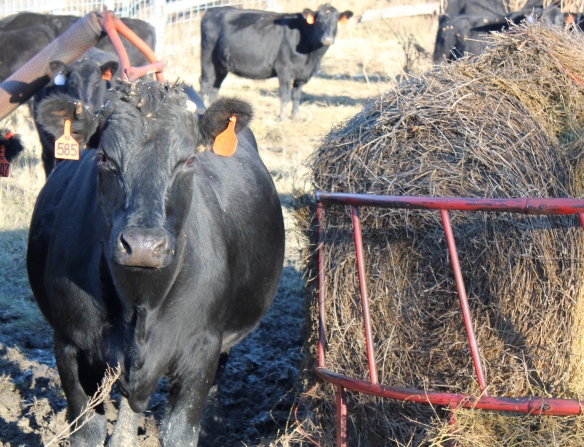 But, cattle or human, you can’t escape it.

So slap on your beanie and mittens. You can borrow my neckerchief if you need to, but you might as well hunker down.

13 thoughts on “Winter, roundup and my neckerchief.”