Uff, it’s been a rough week out here at the ranch, for man and the little beast.

And by little beast I am referring, of course, to the pug.

Let me just start here with the mild heart attack that helped kick off my Sunday morning curling hangover at the beginning of this long week. As I was at the in-laws drowning my sorrows induced by too many Bud Lights the night before and deciding that I am getting too old to stay out until 2 am (and also deciding that there is not enough coffee in the world),  in my attempt to declare it a “Good Morning” anyway (I try to keep it together for the family), I discovered my body had retaliated against my irresponsible behavior by taking away the one thing that gives me control over my world–my voice.

I felt like the Little Mermaid, but without the gift of great legs and a charming prince.

Because my prince was looking a little haggard as he wished that God had never invented whiskey and reached for his third cup of coffee.

And then the phone rang and his momma answered it…

“Well, hi….yes, yes…it was a fun night…a little wild, but fun. Yes, the music was alright…I think the kids had fun…hmmm…ok….yes….”

I listened to the conversation from under my hoodie and fluffy blanket, deducing from the tone of voice and conversation topics that it was my momma on the other end of the line, fully expecting the receiver to be handed over to me when their chat was finished and trying to figure out how to have a phone conversation with no voice….

…and then mother-in-law turned to my dearly beloved on the other end of the blanket and said:

They wanted to talk to husband?!

While you were out...

This just became serious. My momma didn’t want to talk to me to see how the curling went, to have me pick up milk or dog food or bananas on the way home? She didn’t want to wish me a happy Sunday?! No. She wanted husband. And I pretty much ruled out the one positive outcome of a phone conversation between the two of them–a super secret surprise for yours truly– when I saw husband wrinkle his nose and say the following: “Hmm…that doesn’t sound good.”

Oh sweet Martha Stewart something was up. Was it pops? Was it a neighbor? Was it my sister, a car accident, a raging flood, a house fire, an avalanche…crop circles or those aliens I’ve been waiting for? Why doesn’t anyone ever talk to me? Why do they keep me out of the loop? Don’t they think I can handle it? Bring it on. I can take it. Just tell me. TTTEELLLL MMEEEEAAA!

I gripped my coffee close to my chest and hunched over, blanket draped across my shoulders like a nursing home patient and stared husband dead in the eye as he hung up the phone.

In a pathetic yell type whisper I squeaked frantically:

“What? What? Who is it? Why did she want to talk to you? Who is missing a limb? When’s the funeral? We need to get home…”

He shook his head, rolled his eyes and declared the following:

I gasped and forced words from my scratchy wind-pipe:

“He’s dead isn’t he? Hit by a truck. Eaten by a coyote. Ravaged by a rare pack of angry bears. Abducted by aliens….”

“No…not aliens this time. But he did find a porcupine again. And he has a quill..

Well, I could go on here about how we got in the car and drove home to the ranch to take a look the poor unfortunate soul and make arrangements for the vet. I could give you a synopsis of the conversation we had about how the pug thinks he 150 pounds of pure instinct, it’s just too bad his instincts are so far off. I could give you a million reasons why pugs were not built for a rugged ranch experience and how he might lose his eyeball and might have to wear a patch and how we might have to start letting him smoke cigars and get him a peg-leg and start calling him Captain Pugwash or Lucky

I could tell you how he should have learned his lesson the first time. Remember that?

But you can’t really get after a dangerously curious, playful and mischievous little smooshy faced innocent black dog who has proven time and time again that he is too big for his britches when you come home to find him dramatically hunkered down on my parents’ couch in the hour of his discontent.

Even when his hours of suffering turned into my own as I was charged with driving 45 miles to and from the vet to drop the brave pup off to be sedated and eyeball examined. And then I drove back again to pick him up only to be rewarded with a hefty bill and a bag full of prescription meds that rival the collection you would find in Charlie Sheen’s medicine cabinet.

None of them prescribed for me.

Anyone have a pill organizer I can borrow?

Even though I argue that I may need the meds more than the damaged pug after days of wrestling the 35 pound porcupine hunter to the floor to pry his poor, sore, eye open in order to apply ointment directly on the eyeball as the pug literally puts on an act that consists of whipping his head back and forth in an attempt to release my firm, but loving, grip on the neck that he doesn’t possess. All the while the pug pretends he can’t breathe by making these very dramatic snorting and puking noises while I whisper (because that’s all I can do…still) “It’s ok boy. Shhh. Shhh. You’re ok, you dumb, dumb, poor, dumb dog.”

Pathetic made even more pathetic by the little bandage where his I.V. was placed. Oh my heart.

And after all of this– the money, the drama, the pain and the ointment, the damn pug that I love despite my best efforts still might lose his eyeball, have to wear a patch, get a peg-leg and a cigar and call himself Lucky.

Oh pray for his eyeball.

So that’s that. That is what my life has become.

Hope you have a prick-free weekend.

And if you’re venturing out into the wild blue yonder please let the pug’s misadventures be a lesson to you to always wear the proper attire, and for the love of ggaawwd, your safety glasses. 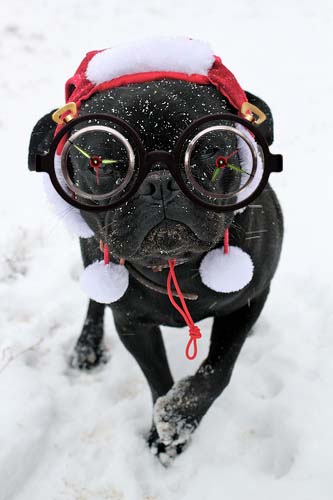 I am all about the lessons.

Love you and you’re welcome.

Oh, and P.S. in case you’re worried, the pug is pain free (thanks to the drugs and the wonderful vet care) and was caught chasing the horses and barking at coyotes yesterday in true form with all of his passion and gusto.

That’s what he told me when he got home.