It’s raining, the grass is getting greener and the calves are being born. I love this time of year where things are fresh and new and there’s nothing ahead of us but the promise of warmer weather (after a couple spring snow storms that leave us holding our breath of course).

Coming Home: Everything is better with some cows around
by Jessie Veeder
4-17-16
InForum
http://www.inforum.com

Calving season is in full force here at the ranch, and this year it’s extra special for my husband and I because part of the new herd we’re building is our own.

There’s a song I know by a Saskatchewan cowboy singer that pretty much sums up the vibe around here; he sings, “Everything is better with some cows around.”

And by better, by no stretch of the word does he mean easier. If I learned anything in my life it’s that better doesn’t always mean easier. (I’ve found this to be true in ranching and in motherhood.)

Anyway, it could be the green grass sprouting up on the hilltops or a little hope of warm rain in the forecast that sends us outside with the enthusiasm of a kindergartner with a new backpack on her first day of school, but I know it’s those cows grazing on the hilltop and the babies trying out their new legs beside them.

Last week, one of our best new cows gave birth to twins. I was in Bismarck with Mom and Edie at a singing job when I got a text with a photo from Dad telling me the news. My little sister, my mom and my husband all got the same message and I smiled at the realization that we’re living in an age where my dad sends group texts to his family about cows.

This morning one of those twin babies is waiting for me in the barn because, as it goes sometimes with animals, the cow didn’t recognize the second twin as hers. 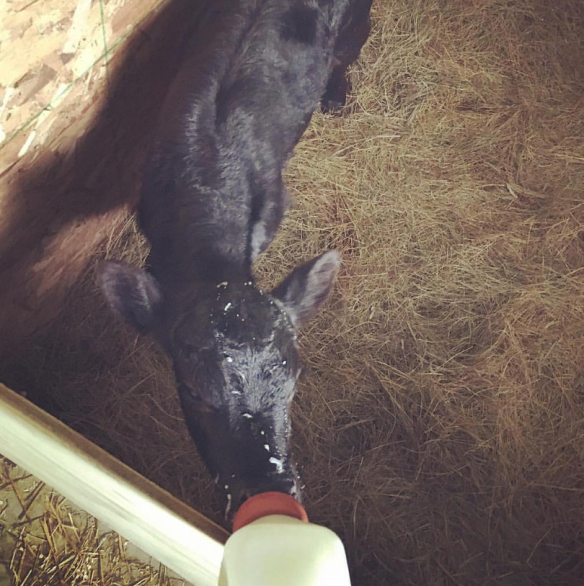 So I’m her momma now, a job I happily volunteered for because feeding babies is something I know how to do, and it’s not just due to my new role as a mom.

I have pretty vivid memories of all of the bottle calves we had when I was a kid growing up out here. One in particular left a big mark on my sister and I, mainly for the role that little calf played in our epic, sisterly fights.

I was 12 and so I pretty much knew everything, and my little sister was 7 and not as eager as she should have been at being bossed by me.

The calf, lovingly named Pooper, became our responsibility and part of our daily chores, which we eagerly took on in the beginning. Because, in the beginning, calves are adorable and have yet to grow into a 150-pound puppy on legs who has figured out two little girls are his only food source, and coincidentally has also figured out how to escape his pen in order to chase them down the road after the empty bottle, tongue out, bellering, head down in feeding position in case he caught up to one.

And he always caught up to one; it just was never this one. Because I employed the age-old advice: Want to survive a bear attack? Just be faster than the guy you brought with you.

Turns out my little sister never forgave me for it. Last weekend I took her down to the barn to have a look at the new baby, and she started getting the cold sweats. Instead of seeing an innocent newborn creature, Alex was having flashbacks of snowpants full of slobber, swift head butts to her rear and unanswered cries for help directed at a big sister sprinting to the house half a mile away, leaving her to suffer a terrifying death by the tongue of a baby calf.

Apparently, the times we spent together feeding Pooper were the first times she heard me cuss like a sailor, knocking me off my very low pedestal. I know because she brings it up at family dinners, holidays and probably the toast she made at my wedding.

Needless to say, my little sister will find different ways to help with the cattle business. Like babysitting Edie.

And I don’t blame her. It’s not easy playing momma to a baby with a giant head and four wobbly legs, especially when you’re feeding her with one hand and trying to put the pacifier back into your human baby’s mouth with the other.

It’s not easy, but it’s worth it. Because everything is better with some cows around.