Last night I went on a walk to close some gates in our home pasture and check a couple juneberry patches.

Juneberries are a special treat around here. Like wild mini-blueberries, if they show up, they show up around this time to much fan fare for those of us who know people who make pies.

Juneberries make the best pies in the world.

Probably because getting to them before the frost kills them or the birds eat them up is so rare, and the entire task of picking enough of the little purple berries sends you to the most mosquito and tick infested, hot, thorny, itchiest places in the free world, so finally making and tasting a Juneberry pie is like completing some prairie, culinary, ironman marathon.

Only better and more gratifying, because, well, pie.

Anyway, my little stroll before sunset was only mildly successful. The gates on this place were made to be shut only by Thor himself. Or the Hulk. Or some hybrid of a bear-man. By the time I grunted and groaned, used my entire body weight trying to push the two posts together to maybe, possibly, for the love of Dolly Parton, stretch the three wires tight enough to get the little wire loop over the top of the scrawny post, I was sweating, cussing, bleeding and wondering how I missed the yeti that we apparently hired to fix the gates on this place.

I called Husband on my cell phone (who was inside the house with the baby, like twenty yards away) and told him there’s no way in hell I’m ever getting that damn gate shut and that shutting the damn gates was his job from now on who the hell do you think I am what the hell is this all about who in their right mind makes gates that tight good gawd sweet mercy Martha Stewart.

And, if you’re wondering, the gate on the other side of that pasture went about the same way…

Anyway, on my way I did in fact locate a big ‘ol juneberry patch. But the best berries, of course, were hanging out about fifteen feet above my head at the very tops of the bushes. And to get to them I had to wade through thorny bushes up to my armpits. But some of those thorny bushes had raspberries growing on them, so that was a win.

I proceeded to eat every ripe red berry I could find.

Even the one with the worm on it…which I discovered after I put it in my mouth and crunched.

So that was a loss. 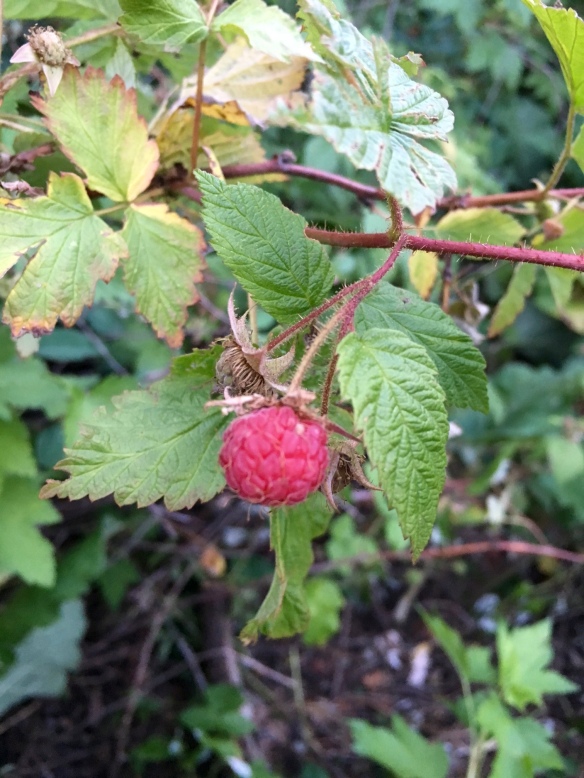 Yes, the raspberries, worms and all, were within my reach. The juneberries, not so much. But tonight I’m going to use my best convincing skills to see if Husband might want to come with me to back our old pickup up to that bush, stand in the box, brave the mosquitos and pick us some berries.

Anyway, when I got home I discovered that apparently wading up to my armpits in thorny brush to pick raspberries was not only a good way to accidentally eat a worm, but, even better, it’s a great way to acquire 500 wood ticks.

I came home and picked off a good fifteen or so. Stripped down to my undies, checked myself out in the mirror, sat down on the chair and proceeded to pick off at least five more.

When I crawled into bed I wondered out loud to Husband what time of night I would wake up to a tick crawling across my face. He made a guess. I made a guess.

But we were both wrong.

At about 12:30 or so, just as I had drifted into a really nice slumber, I was indeed awoken by a tick…but it wasn’t crawling across my face. No.

It was crawling toward my butt crack.

Thank good gawd sweet mercy Martha Stewart, I cut him off at the pass…

Ugh, all I wanted to do was close some freakin’ gates…