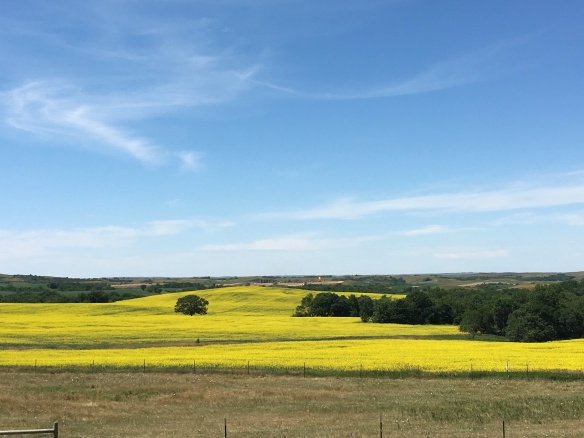 We’re sitting right in the middle of summer here in Western North Dakota. The leaves on the oak trees have finished creating the canopy in the thick coulees, so much so that it seems that’s where you would stay dry in a heavy rain, under those oaks.

And oh, we could use the rain around here to keep the dust down at least. It seems a little late now for the crops, although the hay in the fields up top is going to be decent we think. The guys will start cutting it soon.

Probably should have started already, but isn’t that the story of our lives? Each summer is the same. Not enough of it.

This afternoon I’m heading across the state to play music with my dad and Mike under the summer sky. I’ll get home late, like 1 am, and I’m already tired thinking about it, but looking forward to it. Summer always means a few late nights of music.

Last night on our way home from work in town we noticed our young bulls got out with a few cows. We weren’t ready to let them out just yet, but they had their own plan. So Edie and I got in the pickup with Husband and watched him saddle up his horse while Edie picked at some sweet clover, declared it a flower, sniffed it, tasted it and pulled at its petals before grabbing for another one.

Husband swung the saddle and then his leg over his horse and took off over the hills to see if he could round those creatures up, and we followed in the pickup to open some gates to the corrals.

We didn’t need to go along necessarily, I just like to go along. In my other life, the one before our daughter, this would have been a perfect night to go along for a ride. And we might have had more success as a pair of horses. I would have probably packed my camera because it looked like a storm was about to blow in, and evening storms here can produce the best afterglow on this landscape, but that’s not an option now.

I have different responsibilities. My belly is starting to swell with a new tiny and growing family member taking up residency inside. Edie reachers her arms up towards me. “Up! Up!”she says, because she can tell me what she wants now. And she seems to be a kid that always knows what she wants. My back is already tightening and stiffening and acting up, the result of the weight of two babies I carry every day, one in my arms and one inside me. I’m nervous about what the next months will bring, how I will physically do it.

How I will mentally do it.

This stage in my life is so different. Somehow I feel so outside myself and so much myself at the same time and I don’t even know how it’s possible. I had so much time becoming a woman and a wife without children. I had time to gradually grow into who she was, through trial and error and loss, I accepted that I might just always be her.

And now here I am on summer evenings when the light is just right, my camera tucked away and my horse out grazing on Edie’s clover, fixing my 1-year-old steamed broccoli and blueberries and a purple popsicle for dessert, listening to her sing and boss and test out her lungs in her chair, her little bare feet dirty, her face smeared and her hair wild, just the way she’s supposed to be at the end of a long summer day of play. 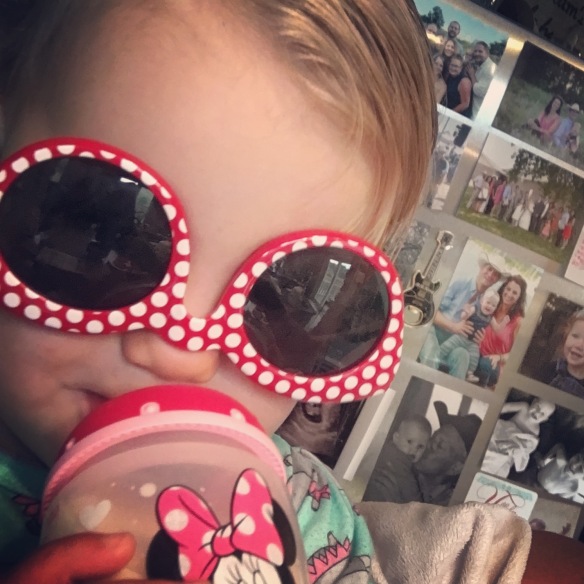 She says “Done,” I wipe her face and run the bath and watch her blow bubbles and pretend to swim and point to her nose and her toes and her tummy and sing Twinkle Twinkle and wonder how she’s learned so much in such a short time on this earth.

Then she says “Done!” because she’s done and I scoop her up out of the tub as Husband walks through the door. She squeals for her daddy and it’s everything.

He didn’t get the bulls back, he said. They ran into the canopy of trees and disappeared.

It’s thick in there, he said. I didn’t rain, it’s not going to rain, but if it did, you wouldn’t feel a drop in those trees.

He stands over me and Edie as I wrestle her into her pajamas. She’s wiggly. I smell her toes and say “Peww!” and she laughs like I’m the most hilarious thing on the planet.

I pick her up, swing her to my right hip and find a comb for her hair, her toothbrush, her blankie, her cup…Husband takes a phone call and as I’m walking back down the hallway, I shift Edie to the front of my body to give her kisses and talk about sleep and, “ping” the baby inside me makes a swift and sharp kick to announce itself, to say hello, to make it feel real.

I squeal a little and look back at my husband. “The baby just kicked me, oh my gosh, big time!” He hears it and smiles that genuine smile I’ve come to know so well and turns to talk on the deck, because he’s on the phone and in two worlds at once…

The sun won’t go down for another couple hours, but Edie’s curtains are drawn and we rock a bit. When I hum, she hums and it’s my favorite time of day. Because I’m tired. Because she’s calm. Because it’s our constant.

But life with a child changes every day, so I know it won’t be our constant for long and that’s what makes everything sweeter and more terrifying. I can’t imagine exactly the shift that will occur with a new addition to this family, but I can predict some things…

And time that just pushes it all along too slow and too fast all at once.

This is this summer.

And no summer will ever be the same…

3 thoughts on “No summer will ever be the same…”