How the progression of time and technology collide and converge

Long ago, before the invention of the Internet, I would spend winter evenings sitting on the worn-out pink carpet on my bedroom floor, pressing record on a cassette player/radio trying to catch my favorite song so I could play it back, over and over again, and commit it to memory.

Before that most of the music I learned by standing on the stage in the lunchroom/gym/music room of our little country school as our music teacher plunked out the tune to “The Old Gray Mare” on his piano.

And then, at home, my dad would play his guitar at the end of the day and I would sing along to Harry Chapin or Nancy Griffith songs. Sometimes he would teach me a special part and, as I got older, I would bring him new songs I found on the radio.

A few years later I started learning them on my own guitar, pressing pause and play and pause and play so I could write down the lyrics, going through the entire process again and again as I worked to figure out the chord progression, writing it all down on lined notebook paper. 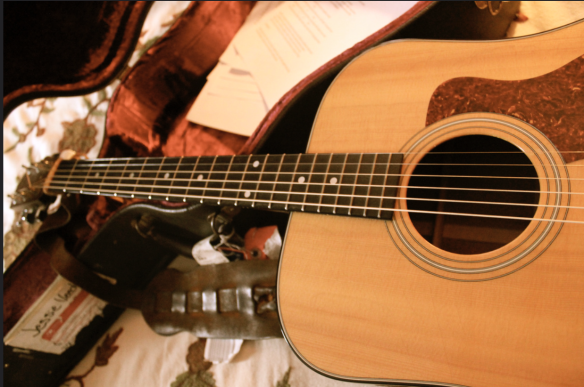 I’m thinking about this today because I’m in the process of moving things out of my office to make room for the new baby. I’ve saved these old lined notebooks, the ones with the handwritten words and chords to my favorite songs in the nooks and crannies of my shelving units, closets and drawers.

And it’s not like it’s at all organized, these archives of my musical history, but if you pull it all out you can see the progression of the time and technology that occurred during my youth, the words and chords from ’90s country songs transforming from an 11-year-old’s handwriting into neatly typed, transcribed and printed transcripts. And it reminds me how I was there, on the edge of adulthood when the world started opening up wider, connecting us to one another from the other side of a computer screen.

I remember back in college, I was driving across the state with my boyfriend (now husband) reading out loud from a book to pass the time, and he said to me, “Jessie, one day you’ll be able to drive down the highway and surf the Internet.”

“No way!” said the young woman who just purchased her first cell phone, the smaller kind with the antenna that you pulled up instead of the kind with the magnet stuck to the roof of your car. I just couldn’t see a way …

And now I’m going to have to tell that story to my children, and they are going to say “They had cars when you were a kid?!” the same way I did to my dad.

“Yes, children, we had cars,” I’ll reply. “But we didn’t have the Internet! Those were the days!”

And then they’ll probably Google it just in case, just like they’ll Google “cassette tape” before they roll their eyes and show me for “like the 50th time!” how to use the smart TV that will always be far smarter than me…