Being a mom to little kids in the great white north comes with its unique challenges. All the extra steps we need to take to go anywhere without suffering frostbite is one of them…and along with that comes my newest and biggest rival: Tiny Mittens.

Squeezing a pair of those buggers on a two year old’s wiggly hands while she’s bundled up like a puffy mummy, repeating “outside, outside, outside…” while I’m bent over, sweating and the baby’s squawking in her swing is a reason only the strong survive up here.

And now my sweet darling daughter has started to do this new thing where she goes boneless and drops to the floor with her eyes closed tight whenever she senses any sort of urgency from her mother, so getting her dressed is like dressing a large, limp, noodle. And getting her to find that nice balance between limp noodle and escape convict is really fun…It’s fun in the grocery store. It’s fun walking out of gymnastics. It’s fun in parking lots in freezing temperatures and it’s fun at potty time…and suppertime…and bath time…and bedtime.

And so I’m dreaming of summer and 80 degrees where the girl can run wild (or flop on the ground) buck naked if she wants, because by the time July hits we’ll have lost all patience for clothes…along with all the mittens that don’t fit anyway…

Here’s this weeks column, where I complain more about it…

Spring-it’s just around the corner. I promise.
Forum Communications

Congratulations North Dakota! You’ve made it to the end of the longest month.

From here I can see spring — if I stand on the top of the highest hill, on a rock, with my binoculars, but probably only because February’s a short month and the past week we’ve had a break from the sub-zero temperatures long enough for us to find optimism and wrangle the toddler into her snow clothes and play outside.

If I start the process after breakfast, we’re usually ready to hit the small sledding slope in the backyard just in time for her afternoon nap. Because there’s nothing more fun than a tired, over-bundled toddler who just face-planted in the snow and has lost the will to save herself because it took too dang long to put her mittens on.

Seriously, if there’s a children’s mitten out on the market that doesn’t require a team of engineers and detectives to maneuver two tiny thumbs in the thumb holes and a therapist to convince the kid to keep them on, I’ll pay you for your recommendations.

Think of all the free time I would have if someone could solve the mitten problem. I might actually get supper on the table before dark, which currently isn’t possible because dark starts at 4 pm.

Oh, I’m only complaining a little, but I think it’s allowed in January. Our mutual annoyance with this long, cold month is what keeps us Northerners bonded together. January is the reason that there’s an entire colony of North Dakotans who abandon ship and relocate to Arizona each season.

And I would be jealous, except who can blame them? Especially when most of the Arizona-bound population has put in their years of earflap caps, long underwear and toddler mitten holes.

People in Arizona don’t have to deal with mitten holes.

Oh, but they come back eventually, usually around mid-May or June, when 42-below zero has become a distant memory, leaving only a scratchy little patch of frostbite you acquired on that one January night you had to walk home because you got the feed pickup stuck up to its floorboards in a snowbank.

If only we could ship our cattle to Arizona for January as well. I’m sure they’d be pretty pissed if they knew there were cows in this world that have never had to lean in against 40 mph winds whipping ice pellets at them, so I haven’t told them.

No, we keep them blissfully unaware and fed each evening with giant bales of hay that smell like the beautiful, green, sunny summers we get up here. 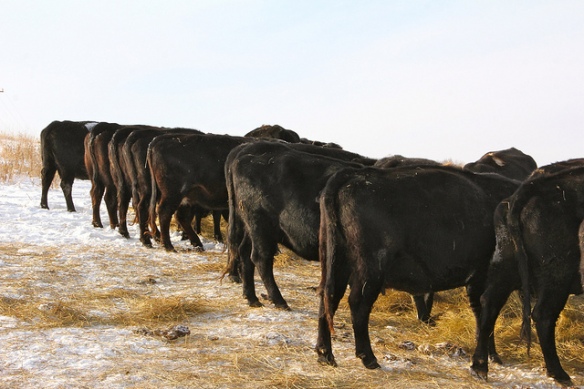 For that reason I hope that cows have memories. Because there’s nothing like the scent of that hay rolling out behind the pickup (that just conveniently dropped its four-wheel-drive) to remind us that this weather is fleeting and the tall lush grass, crystal clear creek water and sweaty, tick-filled days of summer are just around the corner.

Come on over, I’ve got a telescope and a tall hill, so I bet we can see it coming.

7 thoughts on “January. Or, Mom vs. Mittens”