Last week while I was writing my column, unfolding a tale from the olden days about my dear grandmother’s run-in with an ornery bovine and an exasperated husband, a saga of my own was developing in my living room between our new orange cat who now has six names and a mouse, who shall never be named.

At first I thought the commotion our new feline was making was just what cats do when they become “possessed” and chase imaginary threats around the house. I continued with my work unconcerned, encouraging the behavior of Sven (one of his names), thinking he was just practicing for the real fight.

Then, out of the corner of my eye, I caught a glimpse of the threat — and it was not imaginary. The fight was real, and Reggie (one of his other names) wasn’t winning. The mouse ran under the couch. The Cat (his third name) was now on a stakeout.

But I decided to be in denial for a bit. Tigger (his other name) looked like he had it under control and I had a deadline. I continued typing, one eye on the couch, but I couldn’t concentrate.

I called my husband to give him the report, because I heard husbands like to be informed of impending doom. I was right. 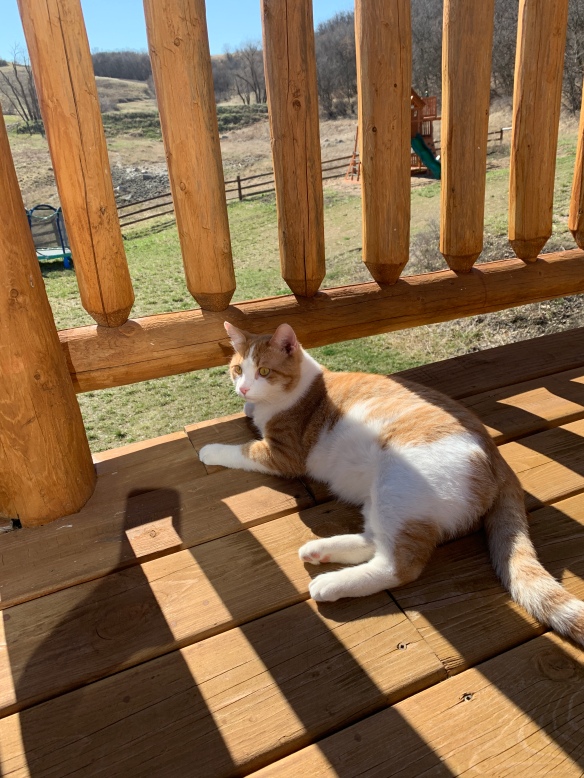 Sven the cat takes a break after a hard day of work.

But I did move the couch because Orange Kitty (his fifth name) needed help. The mouse scampered out toward my bare feet, and though I be tough, I screeched with immediate regret, praying it didn’t wake the kids. Because now the mouse was under my chair and I was neck-deep in a hunt and I hadn’t even finished my coffee yet.

I grabbed the cat and set him by the chair. He didn’t get the hint, but the mouse did, and he ran for his furry life toward the fireplace, huddling there behind the dollhouse. I grabbed Sven (my preferred name for the cat) again and placed his nose right on the stunned mouse. But apparently Sven only likes a challenge, and he turned that nose up and strolled away.

And so there I was, hunkered over, my robe undone, my hair undone, my column undone, my quiet morning undone, trying to teach a cat how to chase a mouse. It wasn’t working.

The mouse retreated behind the kids’ craft cupboard and I tried to pretend nothing was happening. I sat back down. I heard the 1-year-old stir just as I hit “send” on my column and realized that having a mouse and two toddlers roaming free in the house was not the kind of life I wanted to live.

So I got up. The baby cried louder. I grabbed the broom. I sent Sven subliminal messages and we approached that cabinet. I got down on my hands and knees to take a look and the mouse flew out toward my face at lightning speed. And though I be fierce, I screamed.

The baby cried, I wiped the sweat from my forehead and I muttered some harsh words about our broken cat under my breath — until Sven, glorious Sven, emerged from the abyss of dust and smoke with the mouse in his jaws.

I beamed with pride for about three seconds until he dropped it. And though I be Wonder Woman, I screeched. And the baby cried harder. And the mouse ran back under my chair.

But its time had come. I grabbed the broom and Sven and I went to work as a team of freaked-out hunters, me sweeping, him catching and releasing, leaving toys and furniture, my hair and robe flying behind us until Sven crouched over a stunned mouse in the middle of the living room, the door of my 3-year-old’s bedroom cracked open, the baby couldn’t be left to cry any longer and I mustered my courage to finish the job, flinging the remains out the door and turning around just in time to bid my oldest daughter good morning.

And though I be brave, I never want to do that again. If you need me, I’ll be setting some traps.