I’m telling you, it’s a jungle out there.

Well, I’ll be honest here (because I am what I am) it is generally a jungle in here as well.

You know, with the four critters, two humans and occasional visitor popping over for supper…oh, and lovely brother in law who is living in his camper in our yard while on a job out here. Love him. He washes the dishes and brings me Oreos and grills us chicken.  I’ll tell you more about him later, because you are sure to like him too…

but today I want to tell you a tale about adventure—a tale of travel and danger and betrayal and close calls with death and rescue and heroism and reuniting, passionate, true love.

Only this involves a pug, some disheveled horses, a couple humans and….a cat. 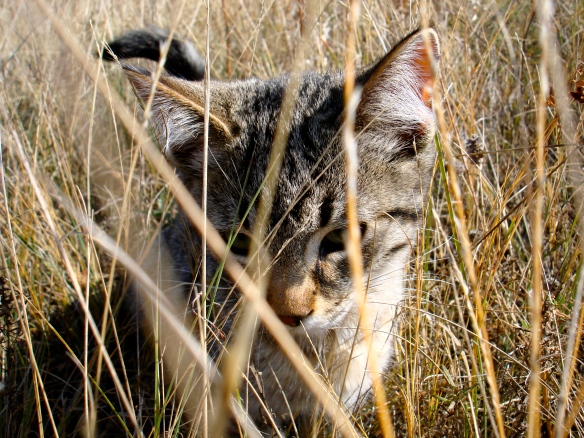 So last weekend was lovely and I spent it with an old friend and a new friend and they came out to the funny farm to take a nice relaxing ride in the hills, breathe in the fresh air and take in the beautiful fall day.

I’ll note here that I was all alone out here last weekend with my momma down the road, because you know, it’s hunting season.

The boys didn’t even leave me the lab.

Anyway, so I was excited for a ride with the ladies, but unsure of the equine skill set my guests possessed. So I decided to play it safe, because, well, you know my track record with luck and injuries isn’t so great. I didn’t want to put them in harm’s way. I didn’t want a rodeo. I wanted peace and peace of mind.

So out to the pasture I went to retrieve our best-tamed broncs. 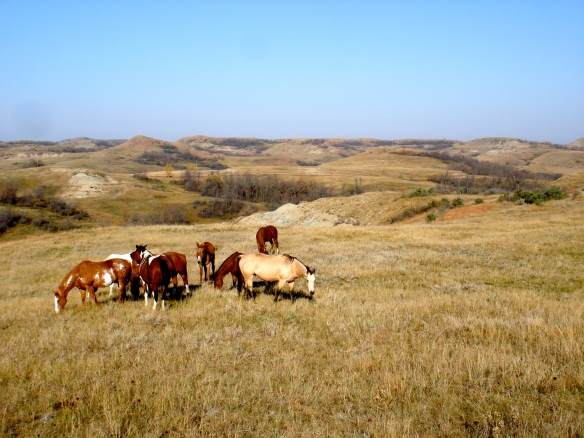 Well, broncs isn’t quite the word.

Nor is tamed really.

Oh, and absolutely full of cockleburs and mud from spending their elderly days out to pasture relaxing, chomping on greens and pretty much letting themselves go.

But it was time that Stormy and The Mare earned their keep around here and after literally waking them up (I think I caught the entire herd snoring) and dragging their fat asses back to the barn, I proceeded to use my hair dressing skills (I have some sweet skills I haven’t told you about yet) to remove a field of burs from their manes. After much cussing and sniffing and scratching and chunks of hair flying, I decided they might be able to pass as dignified, although slightly older, members of the equine family.

They were ready for their close ups.

They were ready for a stroll.

They looked so good, I actually had to go inside and change to my fancy shirt so we matched. 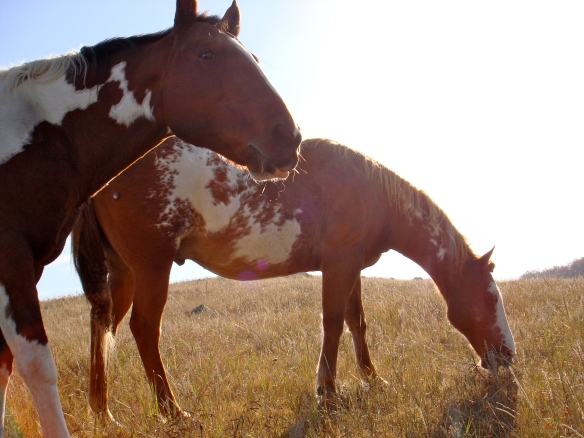 Stormy and The Mare

Anyway, we were ready and presentable just in time for my old friend and my new friend’s arrival. I introduced them to their mounts and, after an explanation on why The Mare doesn’t have a real name, we were off into the crisp, clear autumn morning. 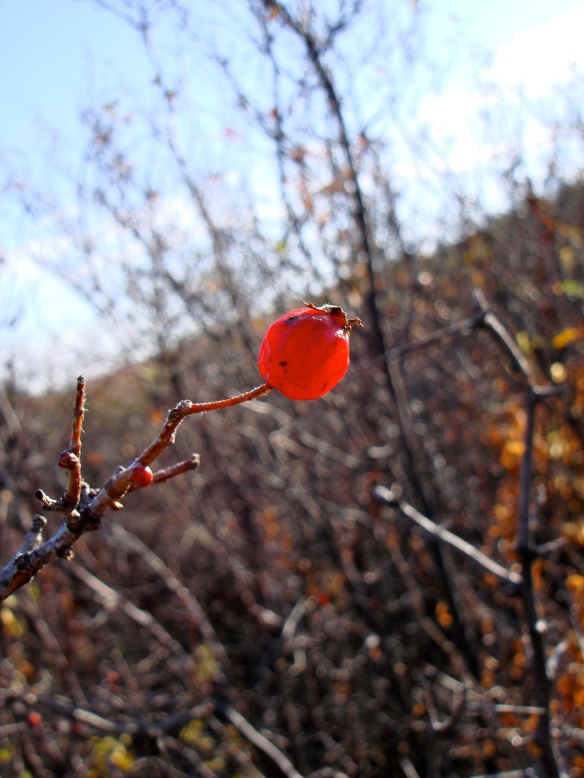 The sun was shining. The birds were chirping. There was a flawless breeze. Not a cloud in the sky.

Perfection, just as I had planned. 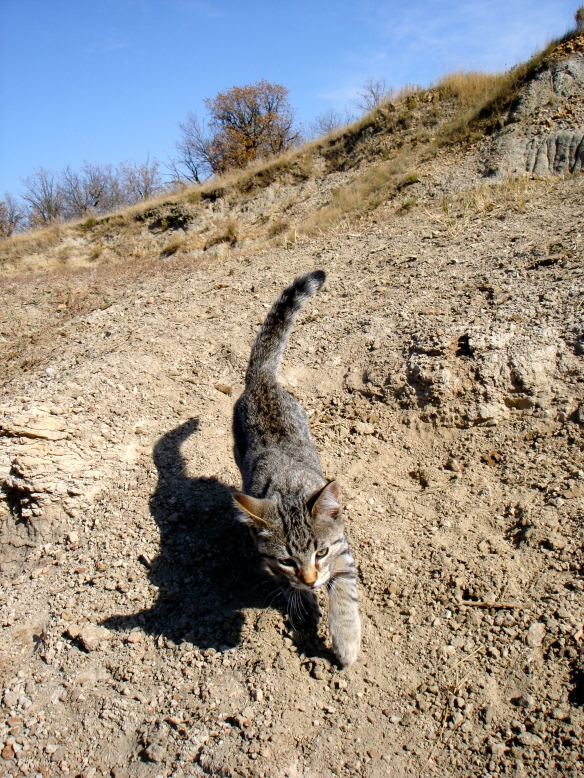 What the hell is that?

Oh, ha ha, how cute, the cat followed us.

I explained to my guests:

They weren’t quite sure.

The Mare started to cough.

The sun shone warm on our backs. 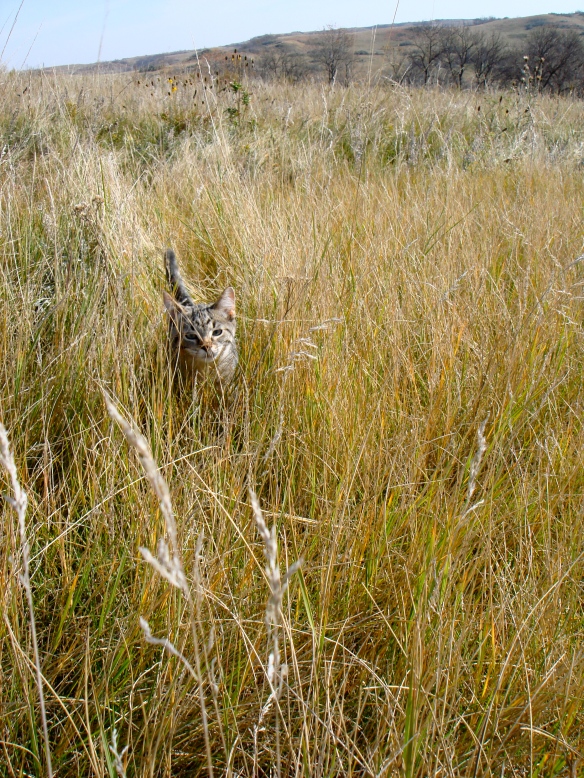 Well, I guess the cat was not only coming along, he was intent on weaving his little body between the legs of the old beasts’ feet. I mean, anything for a scratch. Anything for attention.

I explained to my guests:

“Here, I’ll try chasing him back. He’ll go home if I just encourage him with a little sound effect…you know, scare him home…..”

“Good luck with that.”

My new friend was reminded why she is allergic to cats. 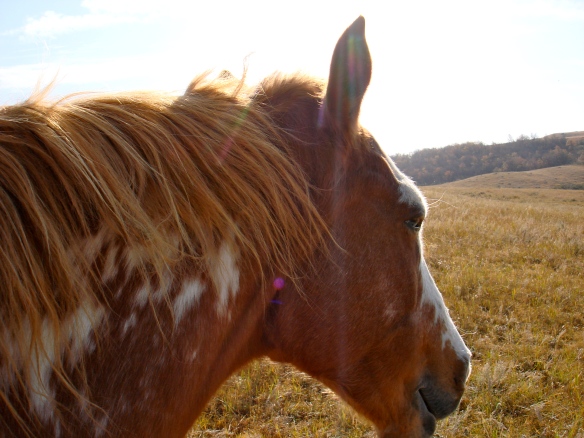 Then our attention was diverted to The Mare who had somehow developed a major limp since the last time we took her on a stroll.

My old friend wasn’t so sure her horse was going to make it.

I told her it was an act, a ploy for sympathy and attention. She has to exercise. This is good for her. She really has let herself go.

“I think my horse just kicked your cat.” 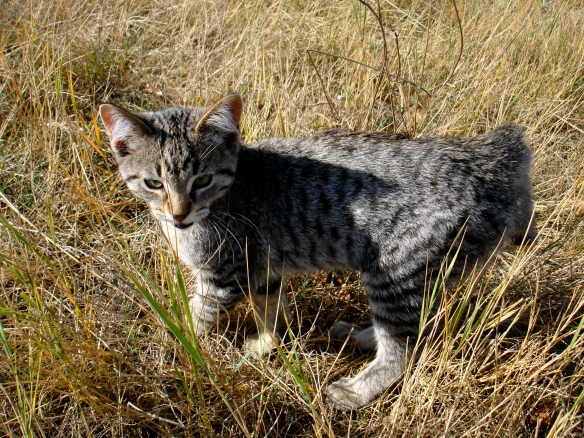 Thinking now would be a good time to head toward home and wondering how much bleeding would be involved with carrying a cat on a horse, we turned toward the corrals.

Barnyard bound, Stormy, who had been trailing a half a mile behind the crew (no doubt facing pangs of jealousy as his much younger rival took up the lead) caught up to give my horse a good kick, you know, to remind him to respect his elders and stop looking so shiny and sleek.

The Mare miraculously recovered from her bad hip or foot or whatever ailment she was faking and picked up speed.

And the cat disappeared.

Me to my guests:

Onward we pushed, my posse and I, mourning the loss of our adventurous little mate, sure he would pull through, sure it would turn out fine, weary and ragged from the drama of it all (or the dust and bur particles swirling in the air).

We arrived, unsaddled, picked our wedgies, brushed our beasts, gave them a treat… 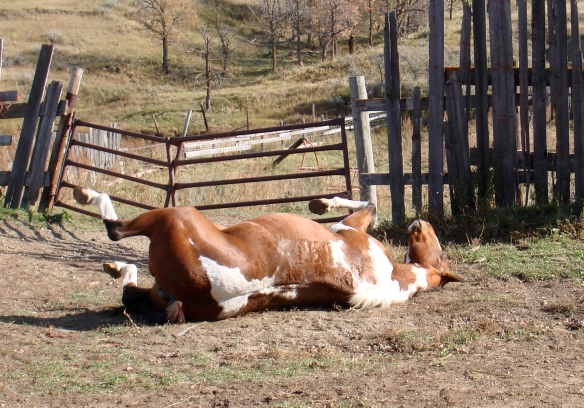 The Mare, rolling off the drama of the ride, trying to get the stink off...

and listened for the cat….

“Oh, there he is,” old friend exclaimed pointing to brave cat’s identical brother, sleepy, lazy cat. “He made it home after all.”

And honest-to-a-fault me, who has been caught in every untrue story I have woven, pulled off the ultimate sin and lied to my old friend’s face.

So my old friend and new friend, who turns out was allergic to pretty much every particle at the ranch, but held it together so graciously and wonderfully for the love of the ride, despite a swollen eye and slowly closing throat, took off back to town, where there is no dirt and cats stay in the house and eat canned food from a fancy dish and there is no toxic dust.

And I convinced myself that the cat would come back.

I made myself some lunch. All will be well.

Looked out the window.

Looked over the horizon.

Turned on the yard light.

Read some pages out of my book.

Yelled for the cat.

Wandered around the barnyard.

Now I’ve done it. I’ve lied and will have to explain this to my old friend or risk living a life with one cat who has to play the role of two, you know, like the girl in Parent Trap, in order to convince my friend I’m not a heathen.

And I kinda missed the crazy cat. He was the yin to calm cat’s yang.

Anyway, it was time to find him. After all, how long could he survive out there with out a proper hat or cargo pants or canteen at least?

So I rounded up Chug the pug (who would have to do in the absence of the lab) and put on my scouting outfit and we went on our own hunt, thank  you very much.

We backtracked and marched diligently along yesterday’s route, staying on course, except for an occasional pause to take a picture or chase a bird or pet the horses, we were thorough in our efforts.

Through the thick brush, up to the tallest hill I scoured the landscape with one hand on my hip, one to shade my eyes and point, Lewis and Clark style. The pug sniffed the ground and followed hot on the trail…oh wait…not a cat, just a jackrabbit. Keep it together man!

I listened in the silence for brave cat’s cries for help.  I scoured the earth, high and low…oh wait, what a beautiful tree….oh, the sky is just stunning today…beep, beep, click… 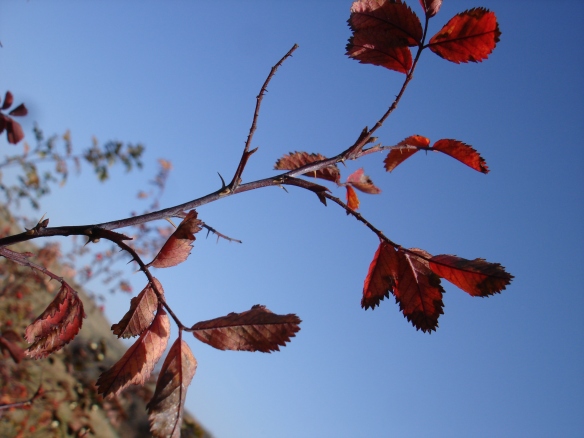 Oh no, could hope be lost? This was my last resort, my last chance at retrieving this animal that was stupid…I mean loyal… enough to follow his beloved human out into the wilderness….

Oh cat, our time was brief together, but so full of love and life…I’ll miss you…good…

The pug stopped in his tracks. That never happens.

I turned toward the snarly brush behind me…

I looked down. The pug followed. I dug through the brush, moving closer to his pleas for help…

Close now, I looked to the sky to catch a glimpse of two little eyes blinking with worry and anticipation. Our eyes lock and the pug went crazy and started chasing his tail and brave cat, way up in the highest tree, where he undoubtedly built himself a little cat sized hammock and settled in for the night in the middle of the most gnarly brush patch on the ranch, came barreling down to the ground at full speed. 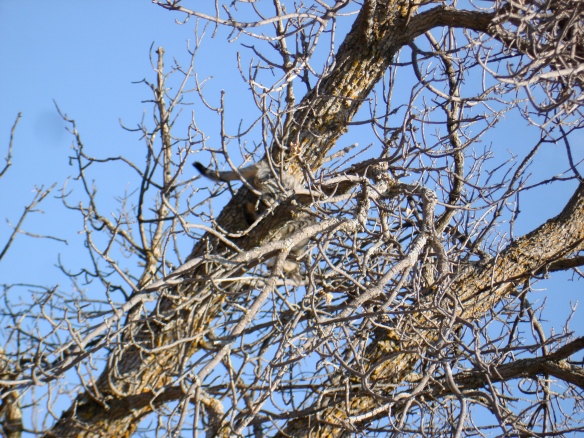 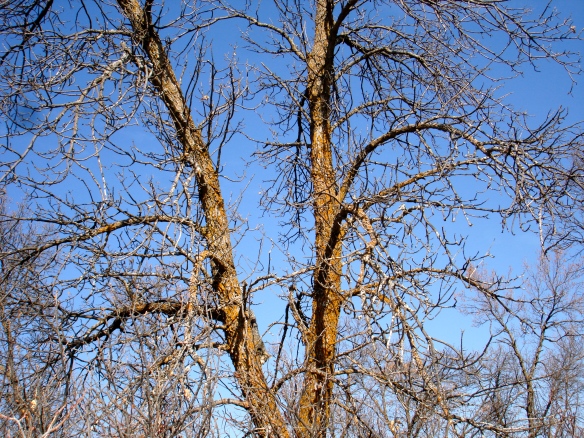 The pug gave him a nuzzle. I gave him an apology and felt really guilty for giving his instincts too much credit. 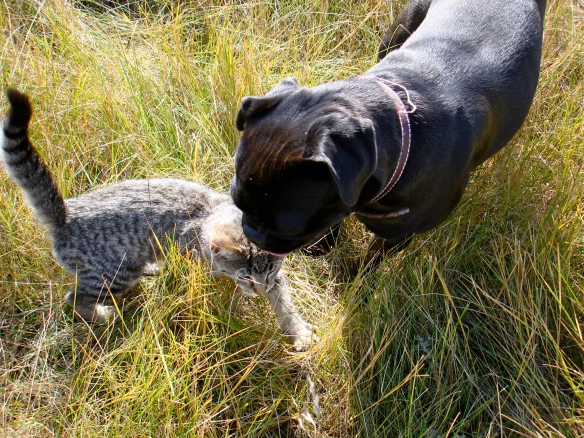 Brave cat started purring, so I think he forgave me, but wasn’t over it enough to let me carry him home. 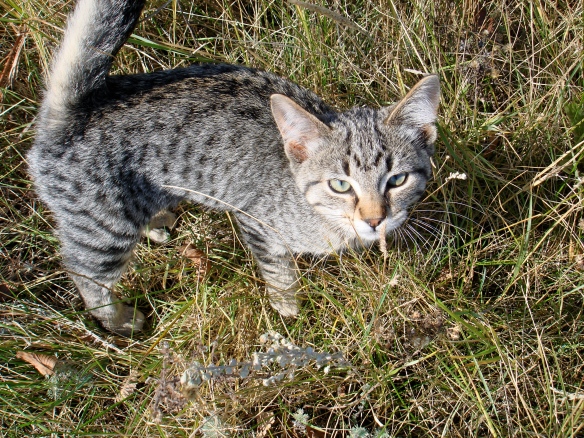 Not my biggest fan... 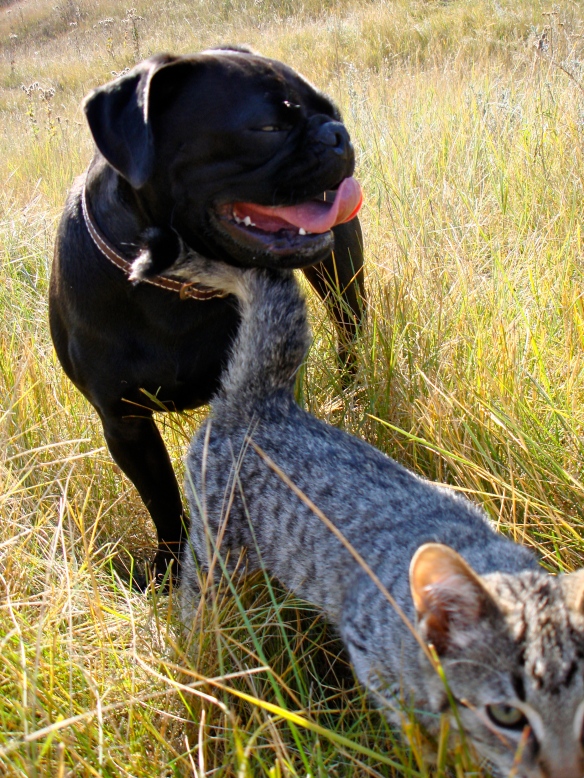 "Don't worry buddy, I got your back."

To hell with me. 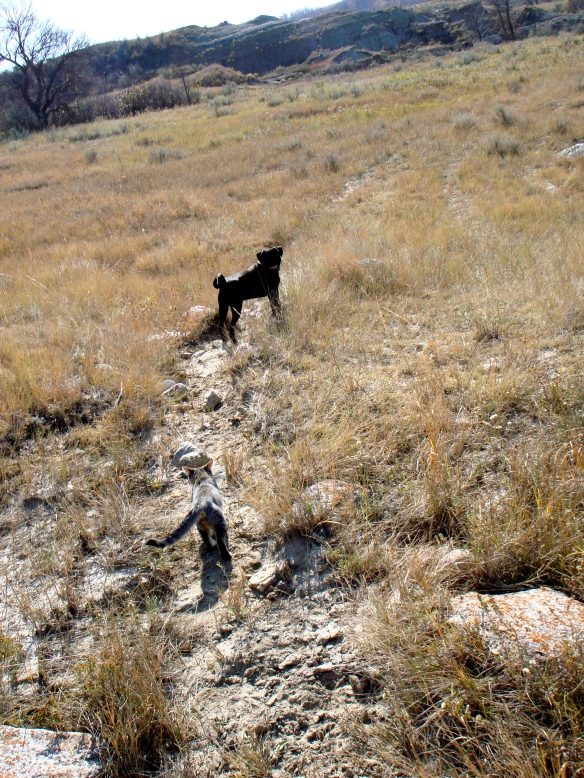 And Chug the pug proudly lead the way… 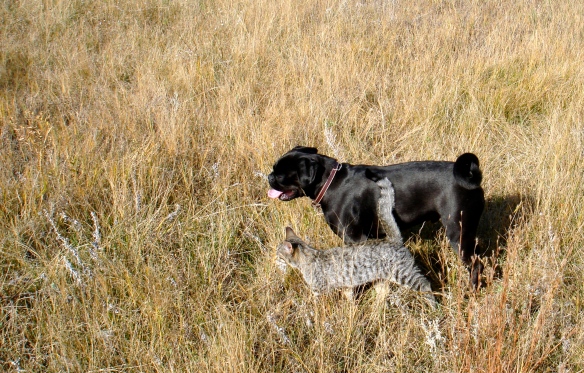 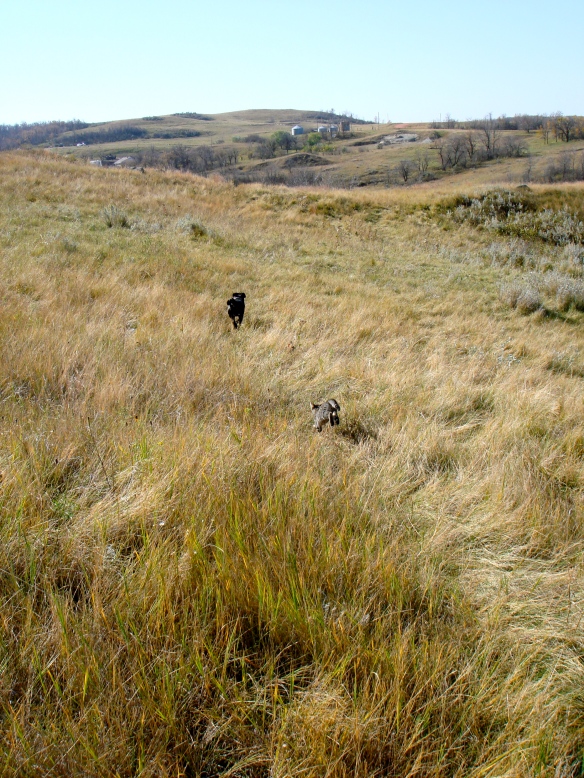 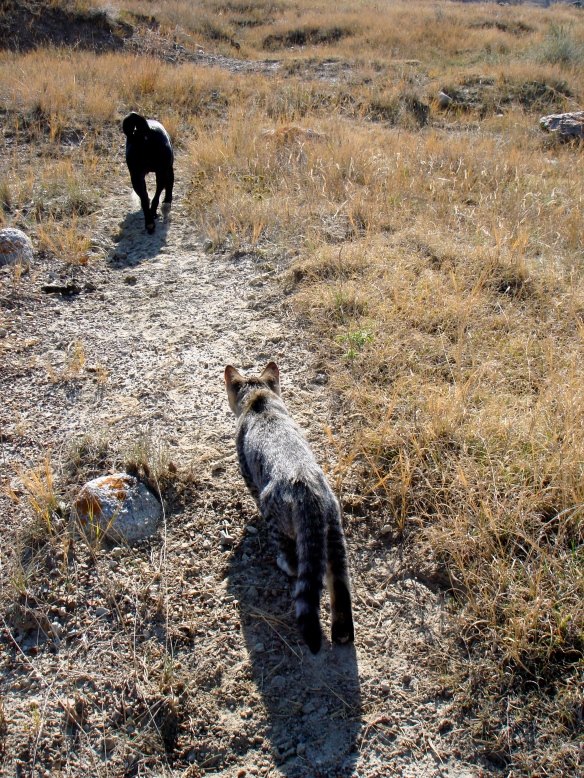 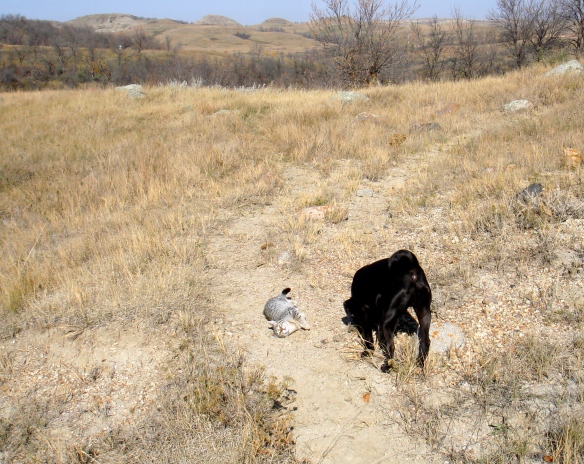 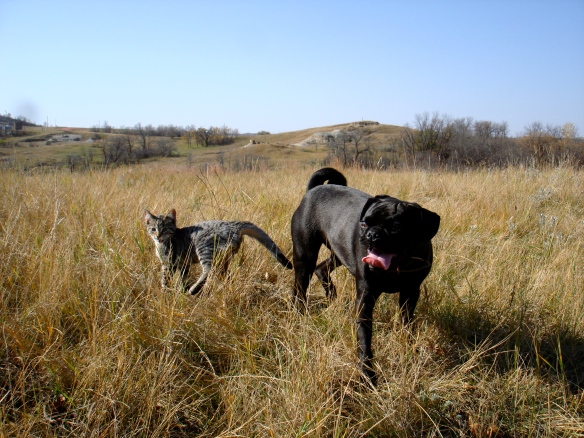 And when we finally made it, I got in my car to head to the big city and found that a mouse had taken up residence in my glove box.

What did I say about the jungle? Yeah, it’s out there.

Reunited, and it feels so good... 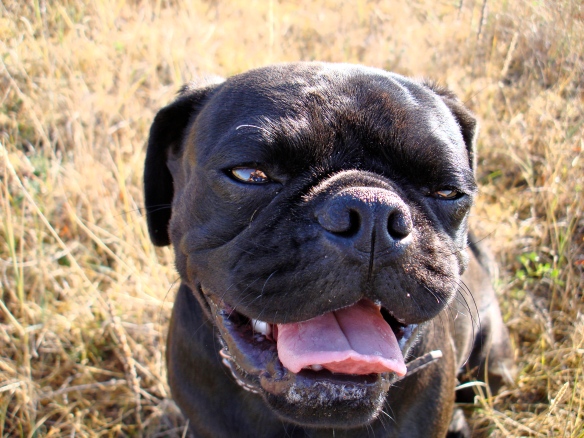 Thanks for the help buddy...I really should get you that cape I promised...