Ok, so I realize I am running a major risk of turning into one of those ladies….

But last night, after I had so clearly declared my feelings about the state of the cats in my life and posted it with authority and a couple necessary exclamation points for the world to see, feeling pretty free and right with the world and where I stand as far as cats are concerned, I headed out to the barn to practice taking pictures with my shiny, new fancy nancy, big girl camera.

I was glowing. This machine could quite possibly be the single most beautiful thing I have ever owned (besides the pug of course, but I don’t own him….no, that’s a free spirit there…free as the wind…and I’m pretty sure he owns me).  Ok, the camera…yes, it’s more complicated than any woman I know. With more bells and whistles and mysterious features, not only is this contraption equipped to capture some undoubtedly precious moments, I am pretty sure, if I find the right button, it could very well send me back in time, or at least to the moon or something.  Yes, my life is sure to be transformed with this little piece of magic…or, you know, allow me to capture an image in lowlight for starters.

Anyway, I was out gallivanting around, looking at the world from the other side of a lens that really, I’m not sure I’m worthy of owning. And as I was taking pictures of the inside of the barn, reveling in how beautiful old things can become when you spend enough money to be able to see them in high resolution (as opposed to the resolution of real life, which, as it turns out, sometimes doesn’t seem to compare…especially if you don’t wear the glasses you were prescribed), I heard it…

The lab, who had been hot on the trail of a mole or something heard it….

The pug,? Yes, of course the pug heard it…

Faint at first, I ignored it, certain it had to be the crazy cat from the house following me again. Cats take a while to learn a lesson.

I continued my quest for a Nobel Peace Prize winning photograph…

Ok, that’s not the noise of a creature I feed from a bowl.

But look at that magnificent spider web and those old horseshoes…

This is a plea for help. This is the sound of a creature that needs rescuing—this means business. And no doubt another house guest.

So, as you can imagine, even though I didn’t get around to making the pug the cape I promised him, the super-dog was all over this investigation.

Just call him the Cat Whisperer. Actually, I think his first book is scheduled for release this winter.

It just couldn’t be ignored so off we went, the pug gallantly leaped through the window of the barn and landed nose to the ground toward the pathetic squeaks. And the lab, not to miss a good hunt, squeezed all 105 pounds of him right behind. 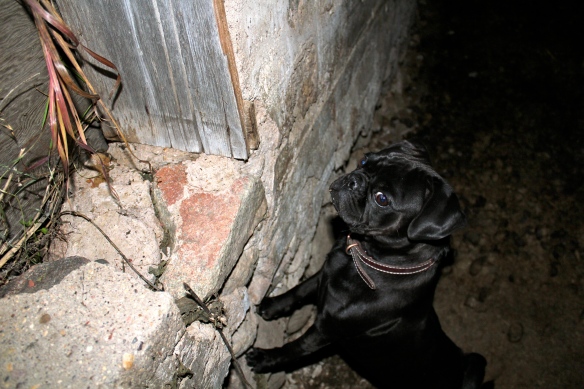 Well of course I couldn’t be left out, and going around to the door and out to the source of the “mews” would waste precious time, so I squeezed through too….you know, all of me…somehow…

Anyway, after the nose of the lab and the nose of the pug took them screaming through the barnyard, weaving in and out of the hay bales, very dramatically collecting burs and kicking up birds, I took two steps and looked down at my feet to discover what I had expected: 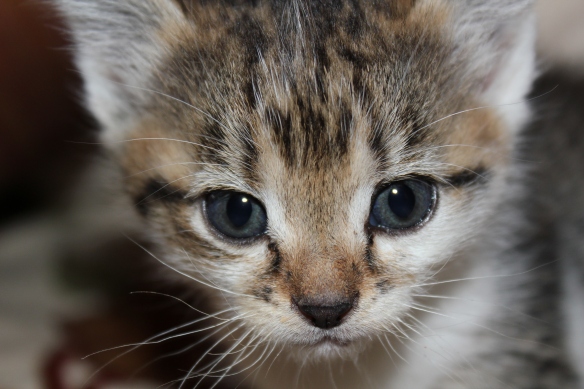 A tiny, fluffy, noisy, pathetic, desperately adorable, fit in the palm of my hand, kitten searching high and low for her momma, you know, in an old tire.

Oh, I’m no momma, and I couldn’t find one around anywhere, especially not in the tire, so, well you know what happened next.

I mean, how could you leave something like this out alone in the world? 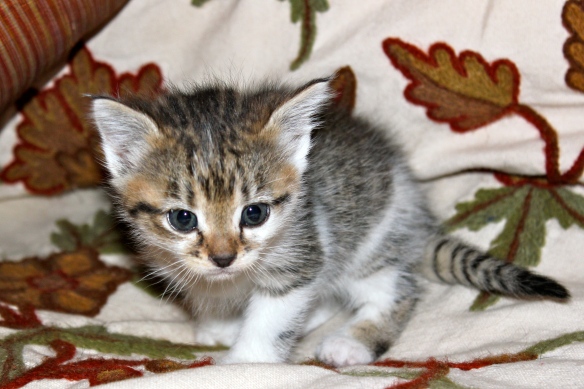 So I swept her up and pulled her close to my face and said a few things like: 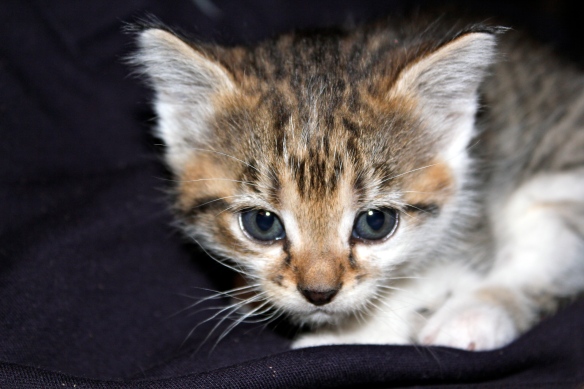 Fast or slow, punctuation or no punctuation, any way you dice it,  it always spells:

And that kitty kitty, I’m sure was glad to be saved.

It took me .5 seconds after that to get back to the house, which was not nearly enough time to concoct a story to tell husband about why oh why I was bringing yet another furry thing into our tiny, tiny home.

But as soon as I opened the door and sweetly presented our little gift from the cat gods (or from someone who is playing a dirty, nasty trick on me for ever having said an ill word toward the species) husband grabbed her up.

And when I began the inevitable photo shoot of the new addition? 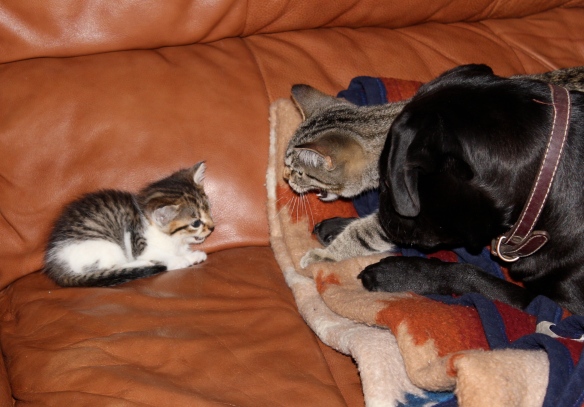 getting acquainted...not going so well at this point... 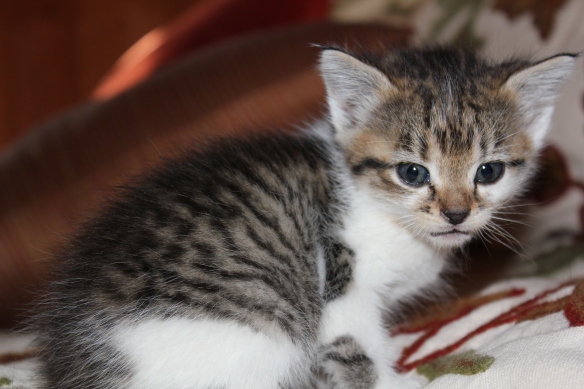 He told me to stop.

“You are scaring her.”

And then, after my failed attempt at giving her milk, he fed her spaghetti.

And put her in his pocket. 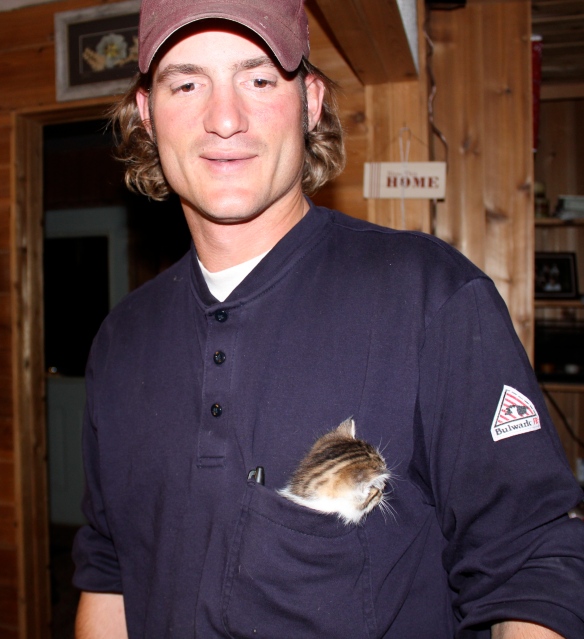 And told me to stay back.

Good Lord, what have we become?

The crazy cat lady has created a monster.

Or a cat farmer.

I wonder if this one will get a name?

NOW IF YOU’LL EXCUSE ME, I’VE GOT TO GET A CAT OFF MY CAPS LOCK…