So there I was, legs dangling and flailing as I maneuvered and shimmied myself out of the window of my friend M’s big blue pickup parked outside the front door of the pizza place in Boomtown.

It was a perfect parking spot for a spectacle that could only occur when my friend and I get together. And it was the perfect time of day–6:00 PM, the dinner rush hour when hundreds of men are flocking in from the oil fields in search of dinner, a cold beer, and if it happens to be an option, maybe some entertainment.

Well, if the gentlemen were paying attention as they shoved their hands in their pockets, talked on their phones and shuffled past that blue pickup and on through the door for some grub, they might have paused a moment to wonder what the hell was going on in there.

Why was the pickup shaking?

Why did it just park, backup, and then park again?

Why were those women laughing so hard?

Why weren’t they getting out? What are they doing in there? Wait…is she climbing out the damn window?

Yes. Yes, I’m climbing out the window. Why? Because the damn doors of this pickup, the ones we used to get in here, worked just fine thirty miles ago. But now? No. Now they are stuck. All four of them.

We tried our best to open them, punching and flinging our bodies at the doors in an attempt to dislodge whatever is potentially lodged, so that’s what the shaking was about.

We tried cutting the engine and starting it again, the sort of control+alt+delete thing that works on computers, but as you can see from my ass hanging out the window and my legs dangling and flailing as I attempt to reach the ground, kind sir, that didn’t work either.

And we’re hungry, but not surprised. This kind of shit happens to us all the time. And her husband will never believe it. She’s calling him now. He’s going to ask her if she unlocked the doors.

But I got this. I got this. No big deal. I’m climbing out the window. No, don’t worry about the gravel road we accumulated on the way here, I’ve had plenty of gravel road on my outfits in my lifetime. Yup, we’re starving and I’m climbing out the window to get the pizzas to bring home to our husbands who will shake their heads and wonder what we did wrong.

We will say nothing. They won’t believe us. Thanks for asking.  Now if you’ll excuse me…”

That’s what I would have said if one of those men had asked. But none did. Thankfully. They probably knew better, knew not to get involved as my friend made the call to her husband and I lowered myself to the ground, laughing uncontrollably and wondering how the hell I was going to get back in that big truck of hers with two pizzas and a box of cheese balls, a dinner clearly made for adventurers like us.

Adventurers and friends who have found ourselves in the throes of a small photography business we created that sends us along muddy back rads to chase toddlers through fields, try to fit babies in buckets and race the sun with a senior in a prom dress to the top of a butte in an attempt to get the best shot.

We’ve been nearly a year in business and we’ve learned a lot about our craft and our friendship, but mostly we learned that it isn’t a day’s work until one of us twists and ankle, trips over our own feet, drops a camera, slips and dangles dangerously from a ladder, or, you know, runs out of diesel twenty miles from town.

So we weren’t surprised about this door thing, because we were due for another mishap, that dark cloud that hovers over our fluffy hair hadn’t quite delivered that day.

But it was a mystery, I declared as I handed the pizzas in to M through the open window, giggling, mumbling, grunting, hoisting and stretching my legs up there in an attempt to follow.

And then I said, “You know, when you get home to show your husband, these doors are going to open right up.”

My friend laughed and said she was sure of it, “but really, what the hell?”

And we laughed for the next 15 miles where I said goodbye and got in my car, praying the doors would open and that it would start, because, you just never know. 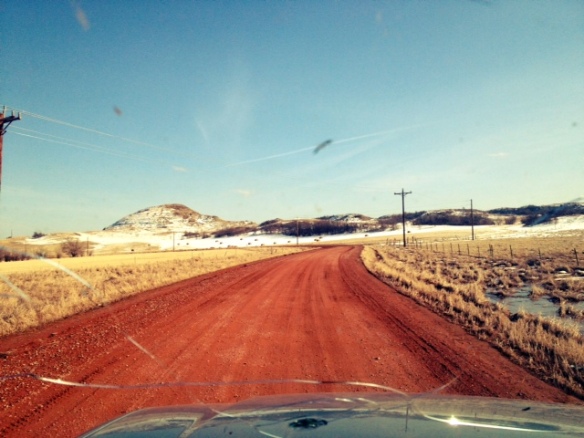 But we did know. We knew it was going to be a mystery forever.

We knew we would laugh about it now and be glad we had one another for witnesses. Because when she got home to declare the pickup in need of repair,  those doors opened right up.