It’s morning. The mist has settled in the valleys of this countryside like a heavy, cool blanket that promises to dissolve in the sun. Dad just sent me a photo from the hayfield, a canvas of pink, gold and green poking up from the fog as he bales up the grass and alfalfa nice and tight for the winter.

Edie’s still sleeping, leaving the house quiet except for the clicking of the keyboard and my head frantic to find something even remotely profound to say before I hear her babble coming from down the hall and I start working on the tasks for the day 10 minutes at a time.

I didn’t know that about motherhood. I didn’t realize how fragmented and scattered a day can become, a little paradoxical considering 100 percent of that day is dedicated to keeping a tiny person content and alive.

The other 90 percent is spent bending over to pick stuff up. 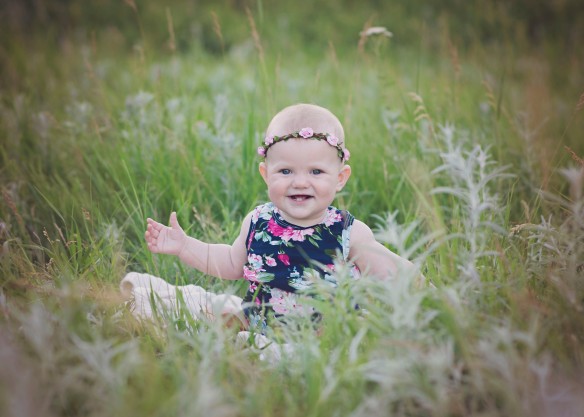 Which leaves no time left for math and just a few slivers here and there to get work done. Or wash a dish. Or take care of the gray roots coming from my 3-month-old dye job.

And this is where I am now. Looking for the balance in being a work-from-home mom, quickly realizing that the word “balance” should not have been invented, because it does not exist, not in the way we all dream it anyway.

Last week I had a performance in a small town in the middle of the week. My husband has been arriving home from his full-time job in the evening to help Dad get the hay crop put up between rain storms and broken down equipment, so I loaded up the baby, my niece and my guitar in the big pickup, leaving his evening free for work, because turns out dads are searching for that balance-myth, too.

I stood up there behind that microphone and in front of a small crowd that gathered for hamburgers and music on a Wednesday night, telling stories and singing songs while my niece tried to shush our baby who was babbling and screeching happily in her arms. I looked over at her while I sang words written long before she was born and was suddenly overwhelmed by the realization that this is my life now.

And then, in between songs, I found myself explaining the fear I had about it all.

Because, if you remember, I had a lot of time—time to convince myself I was ready, and time, when it didn’t work out, to talk myself out of the whole motherhood thing entirely.

And in a way I was right. I am not who I was before this child became mine. Because before her I didn’t know what it meant to be frazzled and content at the same time.

Like in the two hours I’ve been working on this piece I’ve changed her diaper, gotten her dressed, fed her milk, snuggled her, kissed her, watched her play, fed her avocados, snuggled her again, changed her again and put her down to play while working sentence by sentence and wishing I would have woken up at 5 a.m. like I planned last night.

I likely won’t finish this until she goes down for her mid-morning nap.

Before the baby, leaving something undone would have driven me crazy. These days most things are left to be finished later. I didn’t know I could be fine with that.

And there are about a million more examples like that, most of them involving the common denominator named time. Because I’m no longer carefree with it, not in the way that I was before Edie.

To be away from her better be worth it.

And sometimes the best part is taking her along, looking out into the crowd and seeing her there, fitting snug and happy in the life that I built, arms outstretched, head turned up and laughing, the mist lifting off the doubt, revealing more colors than I could have dreamed.