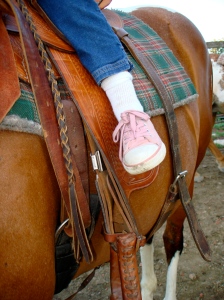 There was an invasion at the ranch this weekend. An invasion of pink and glitter and ruffles and frills and dresses and jewels and ponytails and princess paraphernalia–all of the things little girls are made of. And all of those glamorous, glorious things were smuggled in inside of purple and pink purses and bags on the shoulders of an almost 7 year old and an almost 5 year old (well, when the next July comes she’ll be 5). And in 5.3 seconds it was like Barbie’s mansion exploded in my tiny house, with no sign of Ken anywhere…not even a loafer.

And it was absolutely lovely.

Yes, the nieces came to visit for what they called “a vacation away from their baby sister” while their parents were in Belize for a wedding. But they also came to play in the mud, pick wildflowers, yell at the dogs, swat at bugs, ride horses and become bonafide, tried and true cowgirls. And in preparation for this adventure filled weekend they made sure that they told everyone who crossed their paths where they were going in three weeks..two weeks..one day..today.

And I bought them cowboy hats. Pink ones. Because a girl’s got to look the part you know.

And apparently looking just right is at the top of the almost-7-year-old and almost-5 year-old’s list. Because when I showed up at their doorstep, they were dressed to perfection in matching red and black cotton dresses with ruffles and well placed stripes and dots. Sporting brand new hair cuts, the little blondies were tapping their toes, clutching their princess backpacks nervously, and pacing back and forth, asking gramma “how many more minutes?” “when is she going to get here?”  And while it’s so nice to be wanted, it’s not so great when you are running about 20 minutes behind and an almost-7-year-old and almost-5-year-old-next-July have been told a specific time to expect the much anticipated cowgirl adventure to begin. I am not sure gramma appreciated my road construction excuse, but it was legit.

Anyway, I made it. And I promptly began to pack into the back of my car what I estimated to have been about 1,550 pounds of everything a couple of little girls could possibly need for three days. I mean we were loaded down. But, as I always say, you never know when you’re going to need a pink toy hamster on wheels.

In our 75 mile trek to the wilderness we covered about everything. Who’s your best friend? What have you been doing this

summer? What is your favorite color? What do you want to be when you grow up? Can we get ice-cream?

So we stopped to get ice cream.

“They don’t have strawberry honey.  Only chocolate or vanilla.”

“No banana. Chocolate or vanilla.”

Which I took to mean vanilla and we were on our way to a melty, sugary, delicious, wonderful mess.

And back on the road to the ranch. 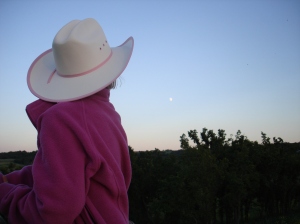 When we arrived, the wonderment began. Not just for the two princesses, but for myself as well. In preparation for their visit, I tried hard to remember what it was like to be an almost-7 year-old and almost-5-year-old-next-July. What  did I do for fun? What did I like to eat? When did I go to bed? I remember much of my young childhood spent in jeans, t-shirts and boots running around in the hills, making tree forts and pots and vases out of the wet clay in the buttes. I remember enjoying projects, like rock painting, which could occupy me for hours. I remember wanting to spend as much time as possible outside.

I don’t remember owning as many dresses as these girls packed for a weekend. Actually, come to think of it, I don’t think I have owned that many dresses in my lifetime.

Anyway, I employed what I knew about entertaining young ladies, as I was once one myself (although I possessed a little less of

the lady part) and the rest the almost-7-year-old planned out for me.

And then we made supper. I gave them their hats. They squealed with delight. We marched down to the barn and saddled up their horses and hoisted their itty bitty bodies up on the backs of these gentle beasts.

They were nervous. They were thrilled. They chattered and asked questions and giggled and told stories and took instruction quite well…and then forget everything about 3 minutes later. They wanted to go faster. And farther. They wanted me to let go of the reins and let them try it themselves. They wanted to go up the hills and through the trees and ride off into the sunset a full blown cowgirl. Alone. Without my help.

A bit jolted, I was reminded of what it really was like to be almost 7 and almost 5 next July. It was about growing up…every second.

In all of the play that was squeezed in between riding the horses and picking flowers and running around outside, every conversation and fantasy scenario was centered around pretending they were older. Pretending they were the big girls and the world around them was filled with things they were allowed to do, allowed to control and experience and excel at. And they pulled me into that play land where I was the mom and they were the teenagers, or we were all ladies putting on makeup and getting ready for a party, or wives in the kitchen baking for our husbands. And it was lovely.

But when I pulled the covers up to their tiny little chins at night, I wanted to whisper in their ears, “slow down little ones.” Slow down and breathe in the air around you and try hard to remember what the sky and the flowers and the bugs and the trees look like from down there. Take it easy and take note of how sweet the sugar tastes on your tongue right now, without any worries. I’ll worry for you. Let your hands dig in the dirt and mess up your clothes. Let your feet trudge up the hill and think about rolling down through the sweet smelling grass. Run as fast as you possibly can (and I know that it’s fast) and hear the wind whip through your ears. Sing at the top of your lungs the words to a song your can’t quite remember. Sneak up on a rabbit with every intention of making him your pet. Catch a frog, climb a tree, splash in a puddle. Be wild child. Be wild. And then tell me all about it.

Because as the big girl they are impatiently waiting to be, there are things I want to tell them, but I know these things can’t be 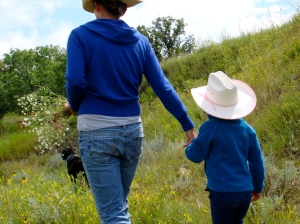 said. Like, being a princess might not be all that Disney promised and sometimes you have to save yourself, and the prince (and then kick him to the curb). I want to tell them to be kind to their grandparents and hold on tight to their hands, because you never know when you will have to let go. I want them to know that there will be times you will curse your womanhood and scream at mother nature for being so cruel, but respect your body and understand that it can do great things–and push it to do so. I want them to know that they should rely on themselves first and make sure to learn to change a tire, fix a sink, check the oil and use a hammer, because it’s not a guarantee that someone capable will be around to do these things for you. I want to prepare them for the fact that they may not grow up to look like Barbie, and that’s a great thing. I want them to know that life will try hard to change you and mold you and break you down, but take a moment to look in the mirror and tell yourself you’re beautiful, without the sparkle, without the curlers, without the frills. And believe it. Wear your dresses when you want to. Wear your jeans when you have to. 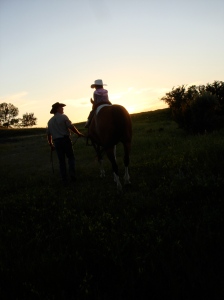 I wanted to tell them all of these things, but I imagine they will get to learn them the hard way, just like every other woman. So as they drifted off to dream land, I chose to whisper a thank you to them instead. Thank you for reminding me to go faster and farther (with nervous squeals) off into the sunset and into a world that waits for three beautiful, muddy, thrilled and wild cowgirls who know a thing or two about how to really live. 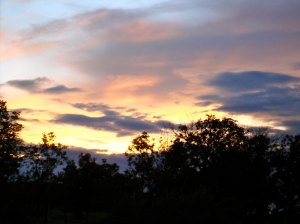