This is how I spent my week in Nashville.

Behind the microphones, in a quiet space, singing and thinking of home and what the words mean to me.

This is Bill, keeping it real.

This is real Bill, producer Bill, keeping it real-er.

This is the lake and marina we would go find when it was time for a bite to eat and a break. 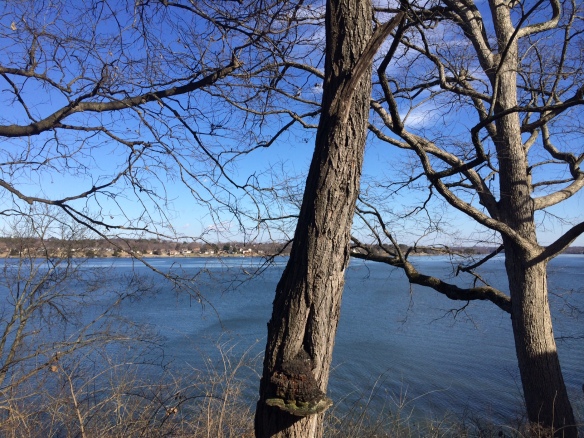 This is where I ate fish tacos and chicken salad and iced tea and a couple of orders of guacamole and chips I probably didn’t need, but I eat when I get anxious or nervous or have a ton of work to do or am in a new situation or find myself at a restaurant and with the sudden appetite of an elephant because I’ve been concentrating for too long on something… 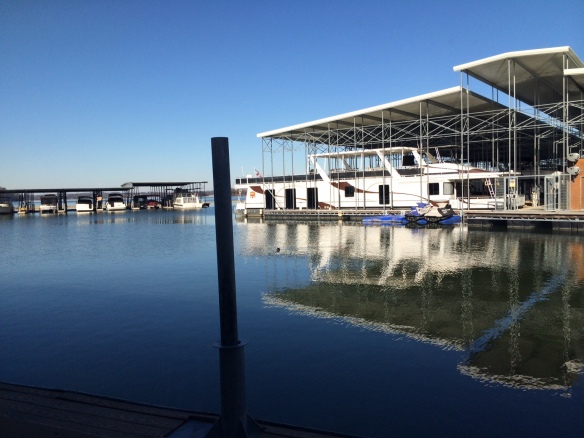 And this? This here is Vince Gill, you know, just tuning up… 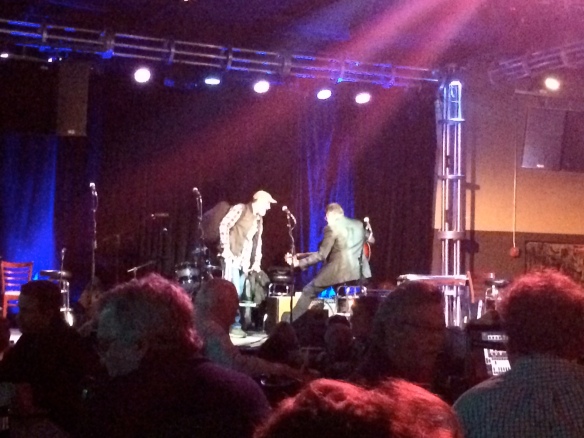 And here he is picking and singing with The Time Jumpers, a group of eleven masters in music, with experience ranging from stints playing with major country music acts, the Grand ‘Ol Opry and Carnegie Hall. 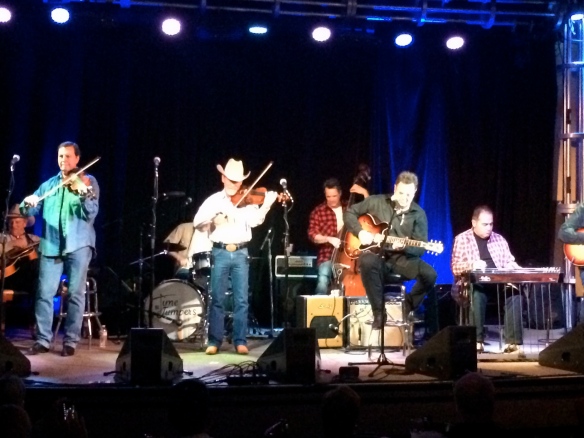 The Time Jumpers recently lost one of their members, Dawn Sears, Vince Gill’s backup singer, to lung cancer. It was my understanding that this was the first show they did without her. To honor her mother’s memory, Tess Sears, Dawn’s 18-year-old daughter took the stage to sing.

It was a special moment.

And speaking of special moments, this is the Bluebird Cafe, known these days for its place on the show “Nashville,” but known to me, ever since I was a little girl, as a spot where the songwriters go.

So here’s a nerdy picture of me in front of it, fulfilling a childhood wish to be there someday. 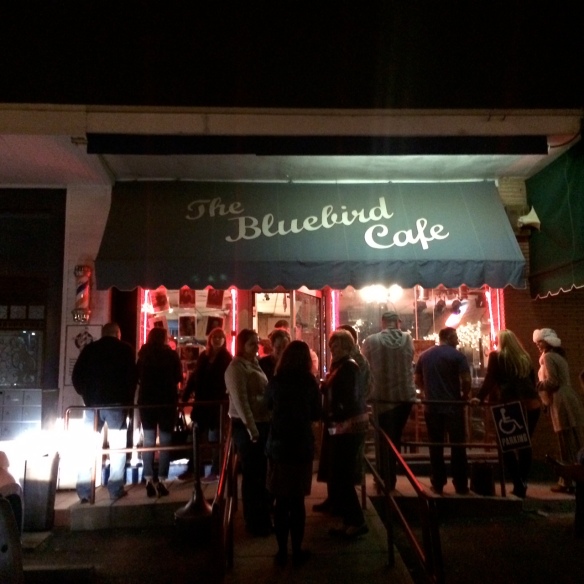 Here it is in black and white, you know, for a moody effect…

And here’s what was happening inside. 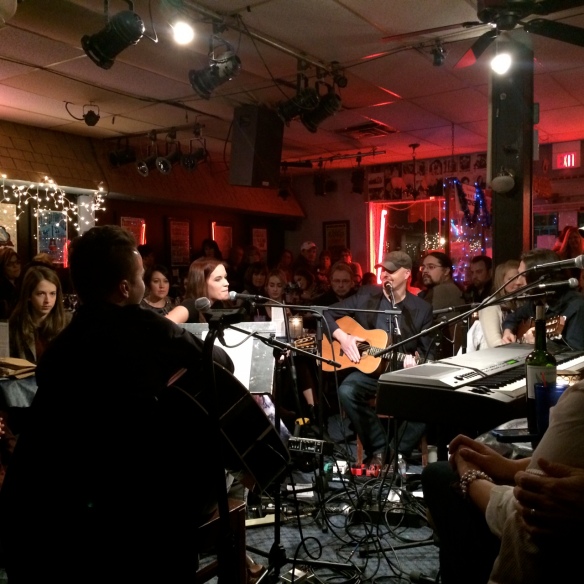 Contrary to what TV would have you believe, it’s a small space, the Bluebird. Seats only 100 people and you should probably plan ahead a bit to get in. Most people have reserved their spots, but Pops and I stood outside for a bit and were let in just as the music had begun.

The four musicians you see here are all prolific songwriters who shared the stories of their music, some witty banter and really epitomized that music is about telling our stories and connecting with people…and so I promptly developed a fan girl crush on Lacy Green, whose album I listened to all the way back home to the ranch…

Speaking of getting home, in case you were wondering, this is how a guitar gets home from Nashville.

And now that me and my instrument are back on the frozen tundra of home, I’m happy to report that I finished up my work on the album this week and am expecting a spring release. I can’t thank you all enough for your enthusiasm about this project. I found the right people in Nashville (Bill and Kirsti with Warner Works and Songwriter Girl) to make the songs come to life in the best possible and most supportive way, and I can’t wait for them to hit your ears.

In the meantime, if you’d like to support local musicians, I urge you to take a moment to vote in the 1st Annual North Dakota Music Awards.

I have been nominated in two categories, “Best Female Vocalist” and “Best Original Country Band (with Outlaw Sippin’)” and would appreciate your support, as would the other amazing artists nominated in many categories. (Friends from all over, you don’t have to be from North Dakota to vote, so don’t be shy:)

And if you’re in the area, make plans to attend the awards show on Thursday, February 19th at the Belle Mehus Auditorium in Bismarck.

Thank you again for all of your support. And I promise, I’ll be coming to a town near you to celebrate and sing these songs at the top of my lungs soon.

3 thoughts on “This is my Nashville. This is our music.”