I’ve had the privilege during the last few weekends of February to be involved in a variety of celebrations focused on music.

Last weekend, for example, I was one of dozens of local musicians who stood on the stage and sang our own versions of Bob Dylan tunes as part of the first ever Dylan Fest, an effort to applaud a man of prolific talent with a broad scope of influence.

The weekend before I stood on the same stage to sing and celebrate women and the wide variety of music that lives in us.

And then I moved down the street and shared the stage with those women as we celebrated songwriting.

The day before I had been in our capitol city celebrating North Dakota musicians. And after the awards ceremony, I gathered with my band on a small stage for an after party where we found ourselves surrounded by musicians of every genre singing along, collaborating and sharing that stage together in the name of camaraderie and respect for our work and an overall passion for words and notes and dancing along for the love of it all.

I have to say, for a woman who has been performing most all of my life, I continue to be surprised by the way music can gather people together of all different ages and backgrounds and stories and experiences and hold us there, connecting us in the moment.

It happened last weekend on a big stage and it happened for me on a smaller stage later that day where I found that I had collected a drummer and a lead guitar player from Bismarck and paired them with a bass player from Fargo and a steel guitar player from Minneapolis and we mixed it all up with a rancher from Western North Dakota and his daughter, the writer and singer who had the big idea for the whole shenanigan in the first place.

In that restaurant in Fargo in the middle of city streets in the middle of winter there were a hundred different stories and a hundred different reasons why we all found ourselves there—a birthday party, a gathering of friends, a drink after work, a chance to hear something new—but there we were, not just in the same room, but nodding our heads and clapping our hands and sharing our stories and toasting and drinking and living in the moment together.

And man did we have fun, the six of us misfits fitting nicely together up at the front of that room singing songs I wrote that some of them had never even played before that night.

And then old familiar tunes that we could all sing along with.

These experiences just keep getting better and more meaningful to me as an artist. And I’m not sure why except to say I have begun to realize how special they are, not only as an artist, but as the person who has sat in a crowd and found myself so moved by what someone else had to say.

Because not only did it make me feel like I wasn’t alone, but because it meant that they weren’t either.

And so I’ve been thinking lately about the value of that moment and how important it is for a community to cultivate it.

Because some of the best moments of my life have been built by music. 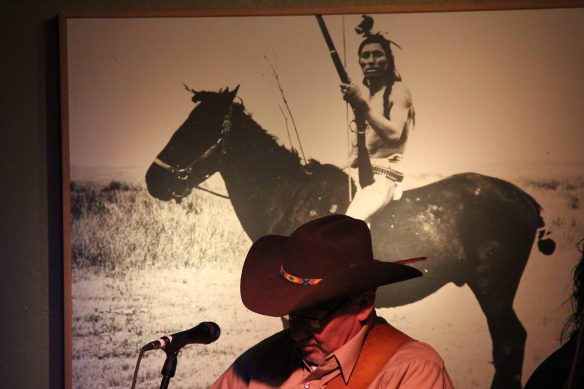 Some of the hardest have been processed through the same medium.

And if there wasn’t a song to reflect it all, well, then I have always been compelled to make one for myself.

So how do we measure the worth of such a thing?

My column appears weekly in newspapers across the state of North Dakota. If you’re interested in running my work, please contact me at jessieveeder@gmail.com