All this talk about roads got me thinking about my bike, which has been leaning up against the shop all summer after being taken out of hiding in the shed in Dickinson earlier this summer. It has been sitting there, with slightly flat tires, so sad looking, pouting, asking me to come out and ride. I turn my head in guilt when I walk outside…try not to look it in the eye. There has been so much to do this summer, like packing, unpacking, packing, unpacking and then, of course, frolicking around the ranch on horseback and on foot. I actually kind of forgot about my bike.

Which is really sad considering how much I used to absolutely live on the thing. I am sure most everyone can remember their first bike as a right of passage. A gift. One more step to freedom because, not only could you get from point A to point B a little bit faster, you could now officially leave your little sister/brother in the dust and set off into new, undiscoverable horizons (or at least to the end of the block and back).

our first car? After we have gone through all of the phases of the bike: riding in the seat behind our mother, the training wheels on, the training wheels off, the streamers on the handle bars, the basket on the front (although, I never had any of these features…my first bike was blue and I’m sure it was made for a boy). Then we learned to ride with only one hand, then with no hands, and then, wow, we could coast along with no hands and no feet. And that was amazing, really. I mean we mastered the thing, so we put a clothespin and card in the spoke to fool anyone in a mile radius I’m sure, that we were not on a boring bike, but riding a so much way cooler moped.

By that time, then, we were probably already practicing for our first drivers test, parallel parking between the lawn mower and a bag of grass seed, learning to work a clutch and a stick shift and use our blinkers and giving our parents mini-heart attacks. And I am sure all of you passed the test on the first attempt and were on to the next phase of your young adulthood. I may or may not have had to take my test a couple times…

It’s a natural transition I suppose, so I thank the Lord in heaven that He finally had mercy and allowed me to pass my drivers test or it would have been a lonely and tiring high school career. Because having to ride my bike thirty miles to town and then back again would have made an awful discouraging dent in my social life. 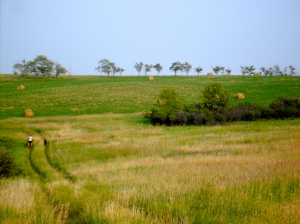 Which reminds me of what I was going to say about life on a bike out here as a kid in the middle of nowhere. See, it was quite a bit different than the bike experience of the town kids. They actually used their piece of glorious metal on two wheels to get somewhere–like the pool, school, the video store, anywhere you get ice cream or candy or to set up their lemonade stand and make millions.

Our lemonade stands didn’t fare so well out here along the open highway. We made some money, but now I am sure our parents called the nearest neighbor and had them “randomly” drive by, only stop and pay $10 for a styrofoam cup of weak lemonade. Hey, we were just happy to have a customer that wasn’t related to us.

Anyway, my best friend and I were the only kids for miles on bikes and we used our cruisers to meet half way between our 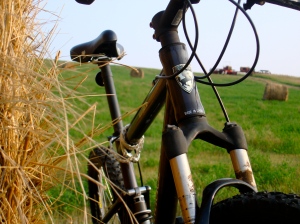 houses, which were about a mile apart. This half-way agreement actually never really worked out for me because there happened to be a huge, steep, daunting hill coming out of our yard, so I spent the majority of the time pushing my way up. But she would wait for me at the top and we would hit the highway, weaving in and out of the yellow, dotted line, gossiping about our little sisters, complaining about our parents and making plans for our next project while we cruised back and forth between the boundaries of the two cattle guards. And sometimes we would stop at her house to get a popsicle and jump on the trampoline and sometimes we would make our way down the big hill to my house to have a glass of water and venture off into the trees to gather juneberries and wood ticks.

But most of the time we would just ride out there on the open prairie as the wind played with our fluffy, youthful hair, tied back loosely in hasty ponytails. We would stand and pedal hard up the steep hills, breathing heavily and then squeal and throw our heads back as we flew down to the bottom. Without a care. From a birds eye view I was sure we looked like we were flying as we were gliding gracefully on that ribbon of blacktop. We sure felt like it.

And, no, we didn’t really go anywhere. We didn’t have change jingling in our pockets to buy some tootsie rolls or a backpack with a towel and sunscreen so we could make a stop at a pool. Our adventure wasn’t interrupted by these things, which gave us time to think about really important stuff–like inventing a bug shield to protect our faces from the critters that slammed into our eyes and got in our teeth when zooming through the tall grass at astronomical speeds. I think we actually executed this invention with a little sister’s bike helmet and a ketchup bottle. Screw the lemonade stand, there was our millions right there.

Yes, we had no one out there, but the black top and gravel roads and an occasional little sister yelling “wait for me” in our dust. And those were my glory days really. That was true freedom.

So last night the pink road and my relatively new, pink big girl bike got together and called my name loud enough that I

finally obliged and husband and I hit the trail. I excitedly climbed on the first bike I have owned in my adult life (which I  purchased when we lived in town with every intent to ride it to work or the store–you know, to get me somewhere) and I made my wobbly way up the hill and out of the yard. Husband cruised up ahead, cruising in and out of the ditches and practicing his wheelies. I worked to balance my camera and take some action shots and discovered that the phrase “it comes back to you, just like riding a bike” is true to an extent, but may require more practice as I slammed on the breaks and nearly launched myself over the handlebars and into the hard gumbo of the road ditch.

Maybe I should just concentrate.

And after a few test runs with the brakes and switching gears, soon I was twelve again, and so was my husband. We quickly veered off of the main road and up the prairie trail, past where I jumped off of my horse and broke my arm, past the hay yard, up through the alfalfa field, past the swather and the perfectly constructed hay bales. We flew down through the coolies and panted and stood up in the pedals as we pushed our bodies up the hills and along the fence lines. We gasped for air, nervously flung our hands to the sky and threw our heads back as we sped through the clover and over the bumps in the now nonexistent trail. I screeched with sheer joy as I caught air over a cow pie and nearly  crashed to the ground. He chuckled as the dogs ran too close ahead and almost caught a tire in their tails. And the horses, not accustomed to this type of activity, spooked and went running and bucking across the pasture, only to return again and again to see really, what these people were up to.

What were we up to anyway? We weren’t going anywhere. We weren’t checking the time or taking our heart rate or

working on building our muscles. We weren’t being careful or quiet or slow to take in nature, stopping to smell the flowers or to enjoy the breathtaking scenery. We were obnoxious really, screaming and laughing and laying down grass and pushing up dirt with our tires. We were hot and sweaty and itchy from the weeds scraping up against our bare legs. We were sucking in air as we bounced out of control out of the yard and over the horizon.

Because in that moment, the last fifteen years never happened and we were kids again for a bit, blissfully happy and youthful on our bikes, re-living our glory days and going nowhere, but going fast.

And we were free….

because that’s what bikes are for. 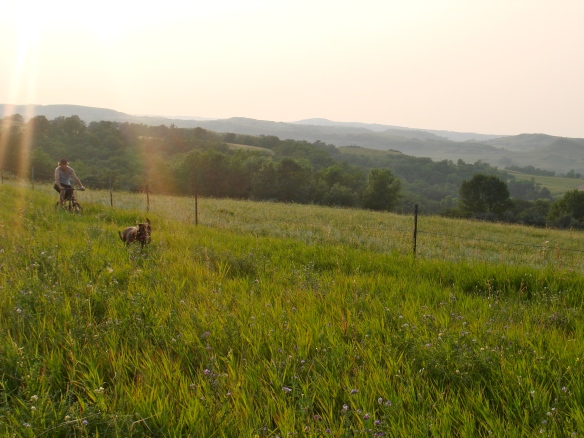 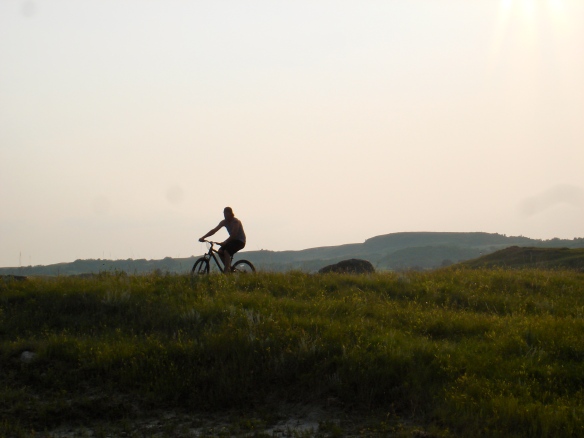 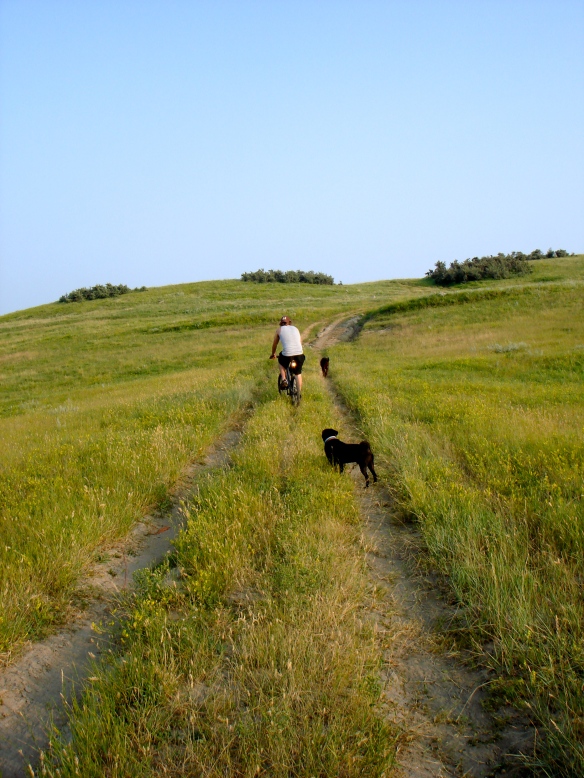 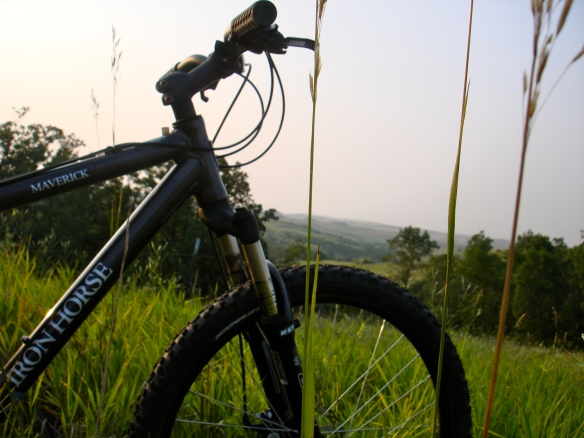