I’ve been working on a  book this fall, a compilation of some of my favorite photos, columns, blogs, poems and recipes from the past six years I’ve spent documenting what it means to come back home again.

It’s been a fun, nostalgic, enlightening and difficult project to take on during a transitional time for us as a family, a time in which we’ve gone from two to three, from couple to parents, from dreamers to sort of dream-come-truers. 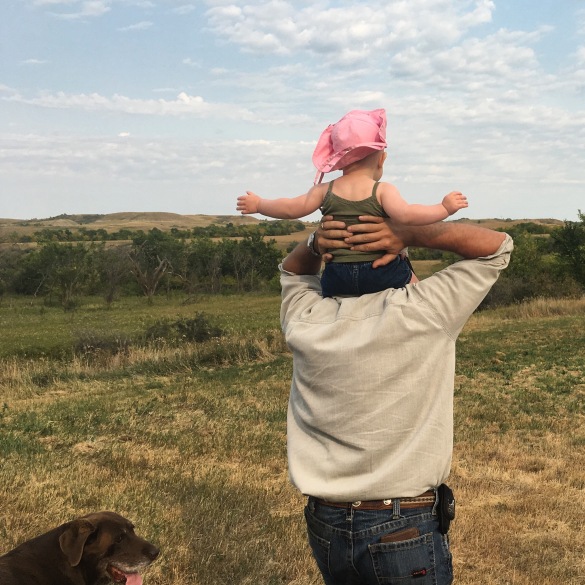 Because I typically don’t spend much time looking back on what I’ve written,  I have to focus on what to write, thinking about what’s meaningful in the moment and what could be learned, I have had to sort of force myself to sit down in my spare moments and look back. And so I’ve been seeing our lives a little differently lately, thinking about how far we’ve come and how far we haven’t, how some things have changed completely and how some things haven’t changed at all and it’s from that place that I wrote last week’s column, that limbo between past and present, a reflection brought on by the rain.

It was late August, and it had been hot for weeks, the kind of heat you remember as a kid, where popsicles melt on sticks in the heavy air that sends the flies gathering at horses’ bellies and driving them to bob their heads and swish their tails in the trees.

We were sweating it out in the little house in the barnyard where my grandparents used to live, three years into our marriage and three months into unpacking our lives back home at the ranch where I was raised. And it was only six years ago, but we were just kids, really, with plans big enough to keep us busy.

But that day we resigned to the weather, keeping busy with tasks in a house that was sinking and shrinking with the weight of time.

And then the clouds rolled in, dark and as ominous as the lightning on the horizon, and we found ourselves standing, noses pressed to the screen door, watching the water form new rivers and waterfalls in the corrals.

The buttes in the horse pasture turned from rock to slick mud in a matter of minutes, and soon I found myself running behind my new husband through the mud, past the new barnyard river and scrambling up to the top of those buttes where we stood side by side before launching our bodies down the steep bank of that hill, sliding on the slippery, wet gumbo, just like we used to do as kids.

I’ve told this story before. You may remember it and how it ended in bruises, bloody scrapes and a heap of laughter spilling out into that dark, rainy night. I’m thinking about it now because last weekend I found myself out in the rain again with my husband. We were riding through an unfamiliar pasture looking for a couple stray cows. The day was still, but the sky kept spitting on us, a little mist followed by small, flying drops hitting our cheeks and gathering on our horses’ manes. It was a quiet rain, the kind that seems to clean up the landscape, making the colors richer against the gray sky. And I just kept looking at my husband on the back of his bay horse, his black hat and red scarf moving along the big landscape, and I started thinking about the times in my life where the rain made the moment.

I decided this was one of them.

And it was perfect timing, I think, following behind him on trails where he broke branches for me or hollered my name from a hilltop. We were doing work, and we were living out a plan, rain or shine.

But that day, I preferred the rain, because I was starting to wonder if it is possible to spend the rest of my life here without losing the magic of this place. A few days before, I received a note from a man telling me that my life seemed romantic in a way that few people know and that I was lucky for it. I sort of felt like a fraud, wondering if I had lead him to a false conclusion. Settling into a new life as a mother and a new partnership as parents, no matter how much we wanted it, hasn’t been an easy and seamless transition. I’ve been struggling with it in ways I hadn’t expected.

I began to wonder if I was the same woman who slid down that gumbo hill with that young man six years ago.

We pushed up the bank of a wooded coulee, and I listened to the rain hitting the leaves and the branches break against the chest of my horse, and I thought about how I was taught to lean forward as a horse takes you through the trees so that you don’t catch one to the face and get pulled off.

It’s a lesson I reach back for when I’m in the thick of it, the same way I reach back for the girl who kissed a boy under that old oak tree in the field promising him forever, no matter the weather.

So maybe it’s the memories we make that keep this place magic.

Or maybe it’s just the rain.

4 thoughts on “Maybe it’s the rain”