Greetings from a hotel room 100 miles away from the ranch where I just consumed an entire take-out chimichanga dressed in my jammies while sitting on the bed watching some Learning Channel special about weird ways to die.

And then I washed it all down with six or seven pieces of Halloween candy I bought during my solo trip to Target where I was only going to buy deodorant, but somehow, because I had time to kill, wound up with Christmas dresses for my girls and my nieces, a new makeup regime, three bottles of vitamins, envelopes, a new bathroom color scheme, a 37-pound bag of candy, a witch hat, princess underwear, three packages of toddler-sized white socks and a partridge in a pear tree.

This is life on the road, people. Or at least the evening portion of the program.

I know it well. I spend plenty of time here and have since deciding to try my hand at this professional musician gig a million years ago when I was younger and drove a Chevy Lumina with a 10-disk CD changer sound system installed in my trunk and all I needed to get from a Fargo gig one night to a Chicago gig the next morning was a bag of sunflower seeds, an energy drink and my favorite albums on repeat.

Turns out what I also needed was some change for the toll booths and probably a plan for where I was going to stay the next night, but that was back before you could book a room and find a husband on your smartphone, so yeah, I did a lot more improvising.

It was back in the olden days when you had to use actual maps. And so my Lumina was filled with one of each from North Dakota to Texas and off I would go to make my way through the middle of America to perform, just a girl and a guitar trying to laugh off the requests to play Free Bird during lunch at a tech college.

Or calm my nerves when I dropped my entire makeup bag under an automatic sink in the public bathroom after getting lost in Minneapolis and running late for my gig opening for a national act.

And then there was the time I completely chipped the front part of my tooth off on a granola bar on a highway somewhere in Missouri with no hope for a dentist appointment before they were set to put a camera up close to my imperfections at a campus television station.

Yes, in between those gigs where I could be playing to 3 people or 300, I had nothing but the radio and the miles between the familiar and the mystery of the towns that passed by my window. Traveling and touring that extensively solo before I even hit age 21 was a weird mix of vulnerable, free, lonesome, nervous, proud and utter exhaustion. Some days it was hopeful, when the audience was captive and the stories came easy and some days were more “opening the door to my room at the Red Roof Inn and finding strangers sitting on my bed.”

And all these years later, so many things have changed, like the maps and vehicles, but the road hasn’t.

It’s still hoping for an open gas station at midnight when I’m finally heading toward home and I’m starving. It’s still floorboards full of wrappers and water bottles and dealing with the quirks of a car that inevitably acts up, locking me out of the trunk for no apparent reason. It’s movies and suppers alone to kill the time. It’s changing clothes in the car or a public restroom, and putting makeup on in the visor mirror. It’s meeting new people and inevitably forgetting a microphone stand along the way. It’s calling home at night and recapping the day, only now the voices on the other line are noisier and smaller and sweeter and there’s more to miss.

But I love it out here when I go. I love to see the Main Streets and visit your Cenex stations and your cafes and hear your stories at the end of the night before my tires hit the road again for home or send me out in search of a glamorous hotel bed chimichanga picnic. 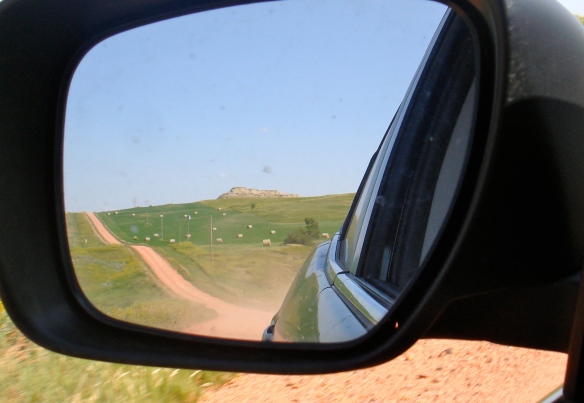 I’ve had some pretty great adventures in the name of music. This summer almost every weekend has been filled with some sort of gig that takes me away from this place for a bit.

I’ve loaded and unloaded my car and pickup dozens of times.

It’s been months since I’ve completely unpacked my bag.

Anyway when you live in the middle of nowhere, pretty much everywhere you need to go involves a road trip.  So it’s a good thing  I’ve had years to master hours of car time. Sunflower seeds. Coffee. An updated play list on my iPod. A mental list of the most convenient places to stop for fuel. Not a bit of hesitation about singing at the top of my lungs, even when pulling up next to you at a stoplight. Windows open when the weather’s nice and the time is right.

The road to and from this place is early mornings, peaceful and dewy, running-late afternoons and evening sunsets where I don’t really feel like it but I’m going.

Some of my most creative times have been behind the wheel of my car, alone out there somewhere on a road in the midwest.

Some of my scariest have been out there too. Blizzard and tornado watches, black ice, flooding and miles and miles of antelope and sagebrush fields with an emptying tank and not a gas station for miles.

In the last few weeks my road trips have involved the men from my hometown band. It’s nice to have a pickup full of voices and stories about the old days playing in bar bands and bowling alleys. I welcome the company in the car and beside me playing guitar.

And it’s nice to have a crew that understands the life of a musician is mostly just an absurd train of events that involves setting up on flatbed trailers as a thunderstorm rolls through town, hauling around and hooking up sound system after sound system, laughing off requests to play “Smoke on the Water, ” to turn it up, to turn it down, to play something faster, or slower or something we don’t know. It’s good to know that this group won’t mind if a gig doesn’t quite turn out the way we planned, or the night drags on into morning, or we have to haul our guitars through a foot of mud to the stage. It’s alright. Because sometimes it’s great, and the harmonies are on and the audience is swaying and singing along and you know that they know that there’s more to music than the miles we’ve put on to get here and home in one piece.

So when you get back to the ranch at 3:30 in the morning only to wake to a call that the cows are in the neighbor’s wheat field, you don’t complain, you just take a swig of coffee, pull on your snap shirt and boots and head out the door to saddle a horse and bring them home.

Because it’s the life I chose. The one I write about and sing about and bring with me when I go.

Music and miles, late nights and cows with terrible timing…

© Meanwhile, back at the ranch..., 2010. Unauthorized use and/or duplication of this material without express and written permission from this blog’s author and/or owner is strictly prohibited. Excerpts and links may be used, provided that full and clear credit is given to Meanwhile, back at the ranch... at http://veederranch.com with appropriate and specific direction to the original content. This includes all written material, photographs and music.
Loading Comments...
%d bloggers like this: