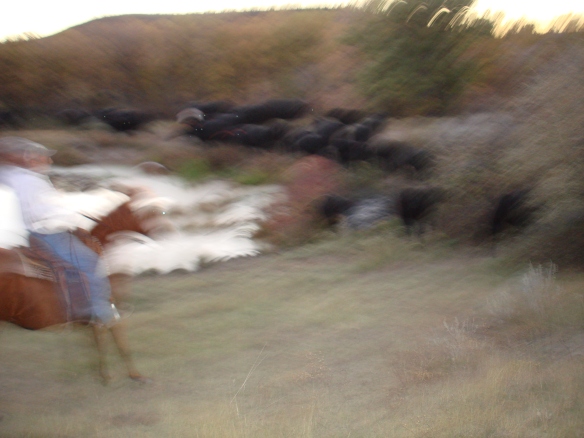 Not all days are picture perfect around here. No. Not all.

Because sometimes you’re a cowboy, and then other times, well…you’re a D-

…no matter the outfit.

See, I had a couple days of meetings in town, which helped fulfill the polished career woman that sometimes finds it necessary to make an appearance, but also resulted in lots of car time, computer time, time in high heals and dangly earrings, planning time, hand shaking time, question asking time and one instance of cold coffee being dumped down the back of my dress shirt (don’t ask). So by the time I got home today I was feeling a little pale and clean-cut and itching to put my big girl pants on and whoop it up on a good ‘ol fashioned round-up…you know…get western on the world.

It turns out I should have had supper first… 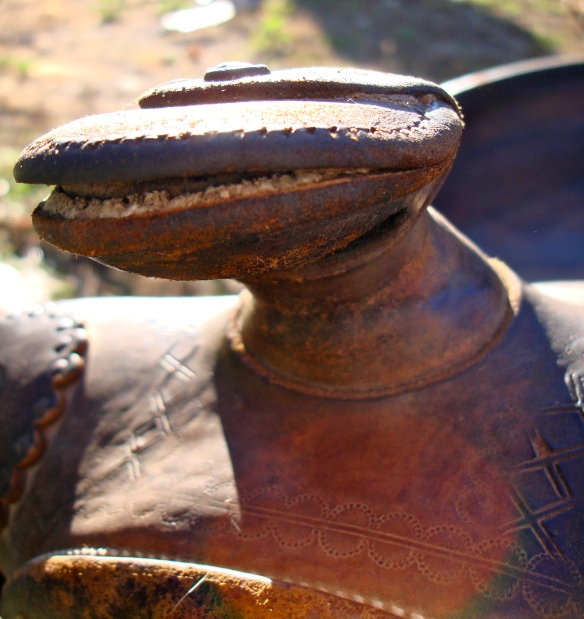 So after a change from fancy print to practical flannel, the guys and I saddled up and headed out on a mission to bring all of the cows home.

Yes, all the cows that were grazing so oblivious, so innocent, so peaceful in greenish-brownish pastures–all the girls, with their hefty teenagers trailing behind them, blissfully unaware of what was about to shake their world. 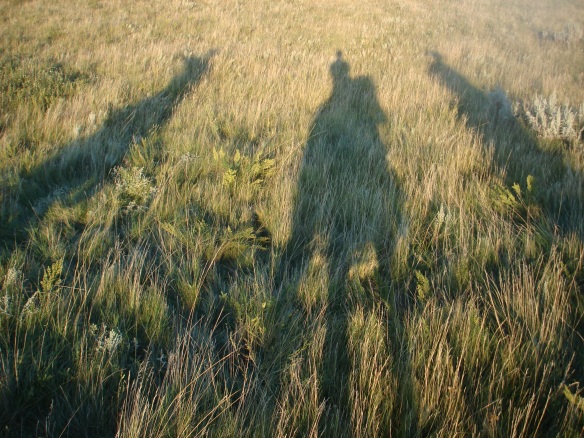 Because just like that, over the hill popped two calm, cool and collected cowboys and one cranky woman with a wedgie and an empty stomach on the back of a wild, red bolt of lightning full of burs and oat fueled energy—not as much cool and collected as hot and uptight.

And we got right to it. Or at least the men did. After we parted ways to move the unsuspecting cattle from each corner of the pasture, The Red Fury and I began to have our differences. 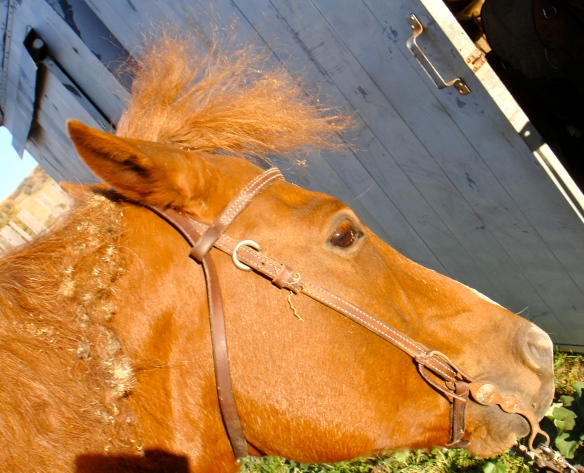 With hair as bad as his attitude...

Because I needed to go left and Lightning Bolt Full of Burs most certainly needed to go right—right back to the other horses who were concentrating less on socializing and more on the task at hand.

For those of you who have had any experience with horses with strong wills and a bit of a spoiled streak, you know the drill. The shrill whinny. The stomp of the feet. The head flail. The snort. The spin around. The side-pass. The crow-hop. The ear perk-up. And, of course, the dead calm that occurs right before they go through the hissy fit process all over again.

Yeah, I’ve been there many times. And even if you haven’t been there with a horse, I am sure you can relate anyway: think child without the cookie he really, really needs, your sister during a fight over closet space or your worst boss on his worst day.

Anyway, some days you’re up for the fight. Some days you don’t back down. Some days you laugh it off and slap ‘em on the ass (the horse, not your boss…or your sister I suppose) and move on with your life. 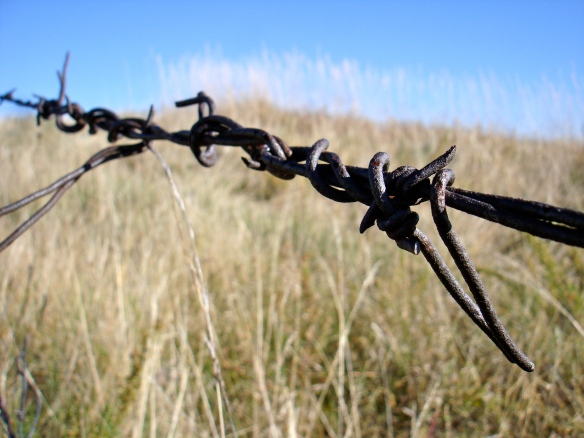 But then some days you just want to rip off your big girl pants and snort and stomp and flail along with them. Or at least light a cigarette (the fact that you do or do not smoke is not relevant in these situations)

Well, contrary to popular belief, the Marlboro Man doesn’t just pop on over the nearest butte around here. At least I haven’t seen him anyway. And out in the middle of this country, the work just has to get done, no matter the mood. No matter the stomach growl. No matter the urge for a martini and a Virginia Slim.

At least that is what I told The Red Fury. And after a pops prompted swat on the lightning bolt’s rump and a forced gallop up the nearest butte and back, the two pains of the pasture straightened up a bit.

When Red Fury accepted that I was just a bitch today (more than likely due to the tight pants and the wedgie) and I accepted that Red Fury was going to take me across the landscape with an attitude that resembled the biggest jock in high school, we were fine.

Yes, we did indeed fall in line and the cows made their merry way up hills, across cricks, through the brush and to the sweet gates of home with the two of us finally working together for the greater good. And I was glad I had the sense to “cowboy up.” 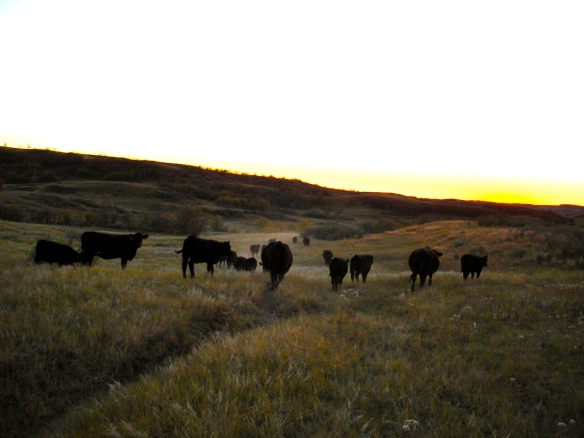 And instead I cowered a bit. I crumpled a bit. I gave in a bit. And the beast beneath me?  Well, he knew what he was dealing with and it turns out that made him nervous. My attitude, my body language, my frustration revealed to him vulnerabilities and weaknesses that don’t work too well in the important and magical beast-and-master partnership. Because when this animal panicked, so did this human–and all trust was lost. 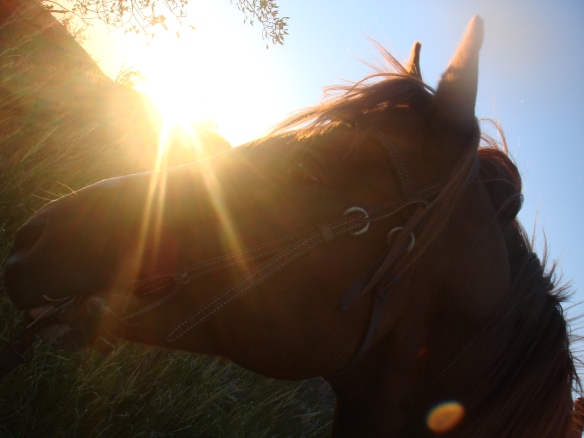 I guess what happens in real life does happen out here after all.

And you know what. That’s ok. Because not all days are picture perfect around here, or anywhere else for that matter. Sometimes you feel like crying and eating macaroni and cheese from the pot and you don’t want to have to explain it. Sometimes you stub your toe and run a red light and get a ticket and come home to a pile of dishes and you don’t feel like looking on the bright side.

Sometimes you spill coffee down the back of your nice clothes and have no idea how that happened and then you say the f-word. Loud.

Sometimes you just want to run like the wind and don’t want any bitch trying to stop you or trying to hold you up.

But no matter how dramatically you lose your nerve, the cows always find their way home–especially when calm and collected cowboys have your back. 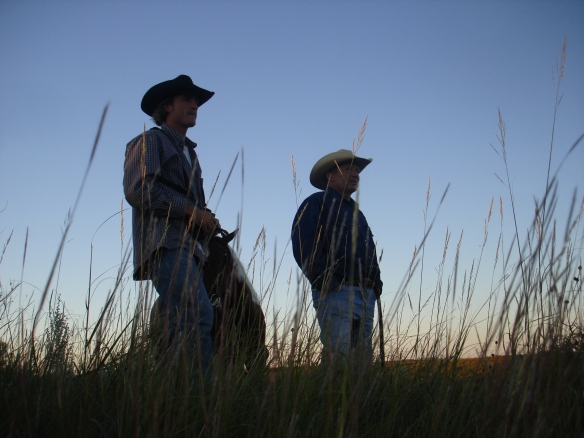 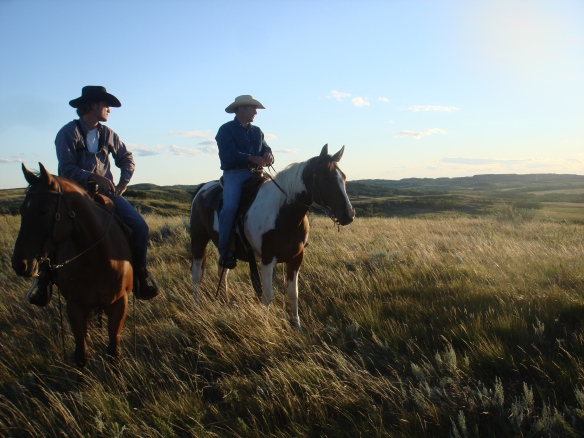 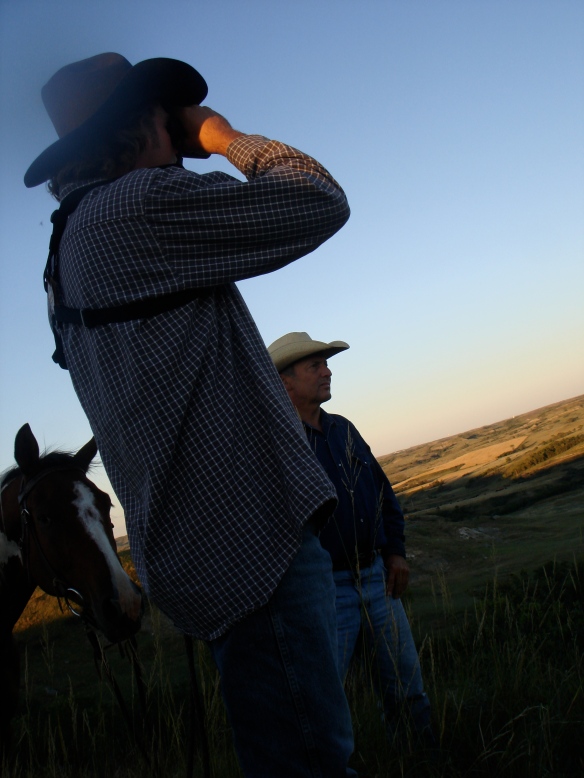 Thanks for supper pops.

Thanks for the ride Lightning (and making me feel better about my bad hair day.) 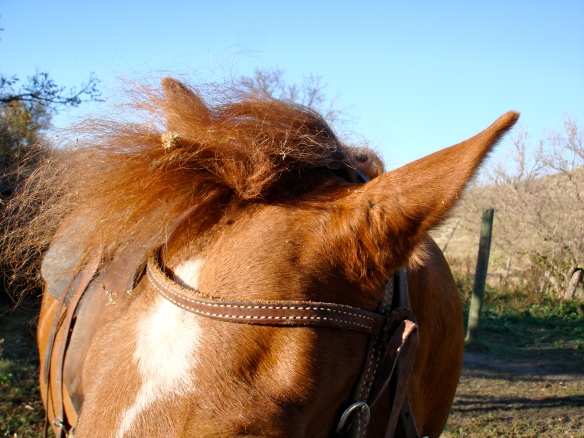 And husband, thanks for loving your wife, even when she is a hungry crab with a wedgie. 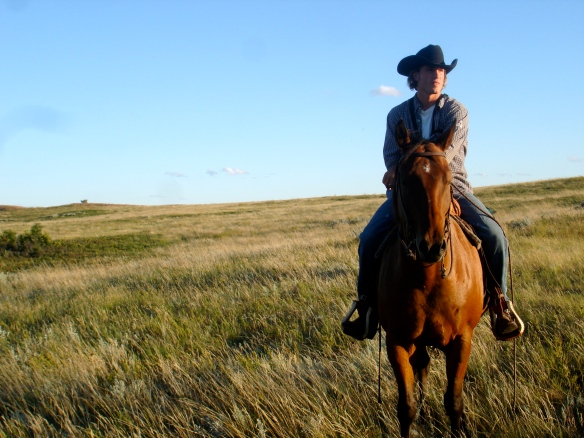